How to Have a Civil Discussion on Gay Marriage

(I periodically re-post this, to keep it in play. Over the years I have written several blog posts affirming marriage as between a man and a woman.)

The core issue is one of authority. What is your authoritative text. Whose voice or voices do you bow before?
Pause here. Everyone has their authoritative text, whether it is written or not. So do you. Most do not reflect on this.)

So...
For a Jesus-follower the question is: Does the Bible affirm sex-same unions?

If you are not a follower of Jesus, or if you are an atheist, then - of course - this question has no relevance for you. But, again, you still have a worldview. The philosophical question is: Is your worldview correct?
Is it possible to get beyond a shouting match and have a civil discussion?
I believe so. Here are the steps to take, as I see things.

Below is my flow chart for having a civil discussion on gay marriage. (BTW - our culture has already decided on this one, sans understanding. But, in matters of Christian understanding, the moral pronouncements of the prevailing culture are irrelevant. It's like using the sport of throwing horseshoes to critique the game of tennis. Within the worldview of Christian theism, this remains a discussable issue.)
This process is a slow-cooker. In my case it has spanned almost five decades of thinking, studying, researching, dialoguing, and praying. You probably do not have the time to do this. But note this: If you are unfamiliar with the relevant literature, then do not hastily judge me. (Like, "How hateful John is!") 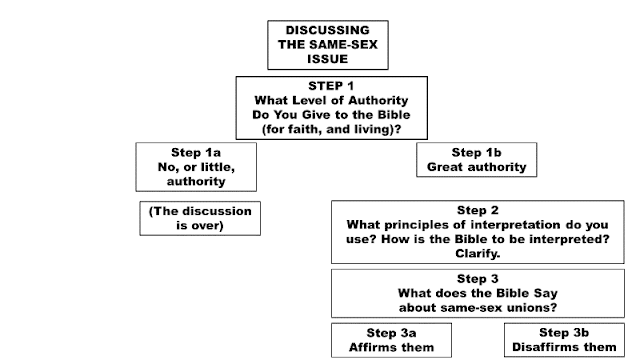 On a scale of 0-10, how authoritative is the Bible for you (with '0' being no authority, and '10' being fully authoritative). This is the first matter that must be discussed, without which there will be no meaningful outcome.

If the Bible has no authority, or very little authority, then the Christian discussion is over. Because, of course, we will disagree on same-sex marriage. There will be a kind of "clash of civilizations" (following Samuel Huntington - see below*).

However, I am interested in the person who gives the Bible little or no authority. I want to ask them: "What text (narrative) is authoritative for you? Have you thought about this?"

Again, if someone goes to Step 1a, then the intra-Christian discussion is over. But, since everyone has a worldview, a narrative they live by, what is theirs? And, should one respond "I have no guiding narrative," that itself is a guiding narrative, to which I will ask for some justification.

To say that the Scriptures have great authority is to say they guide and influence our faith and life. They are not just occasionally read, but studied and looked to and lived by.

We must handle the Word of God correctly, or rightly.

To do this requires study. Two good books on how to interpret the Bible are:

That is, to enter more fully into this discussion at this point, one should have some understanding of principles of biblical interpretation. Everyone cannot invest decades of study into this. But it helps avoiding horrendous mistakes in reading the Scriptures. For example, context is important in the interpretation of anything, to include interpreting the Bible. Because a text without a context is simply a pretext to say what you want the text to say.

STEP 3
This is the question for followers of Jesus who give the Scriptures great authority.
As Craig Keener writes, "My primary vocation is as a Bible scholar, and I need to explain the text faithfully."
Correct. The issue here is: what does the biblical text say, as opposed to what we might wish the text would say.
This is why, e.g., what the prevailing cultural wisdom says is irrelevant to the interpreting of the Bible, and any text, for that matter.
STEP 3a

The person who ends up here must justify their interpretation of Scripture, and conclude that God affirms same-sex unions. They might find themselves agreeing with people like Dan Via (presents view #2) and Matthew Vines, et. al., for example.

The person who ends up here must justify their interpretation of Scripture.

At this point I have long laid out my cards on the table. I'm with Keener (and N.T. Wright, Ben Witherington, Tim Keller, Robert Gagnon, Wesley Hill, Francis Chan, et. al) when Keener writes: "I believe that the biblical passages about homosexual behavior are fairly clear... most exegetes, whether they agree personally with Paul or not, still regard Romans 1 as disagreeing with homosexual practice... I would be happy to be persuaded otherwise, but so far it continues to appear to me that this is where the exegesis strongly points."
Here's where I land on this. This has been our church's position since its inception. Marriage is a covenant relationship between a man and a woman, established by God as the foundation of family and human society reflecting the nature of Christ’s sacrificial love and devotion for His bride, the Church.

***
* "It is my hypothesis that the fundamental source of conflict in this new world will not be primarily ideological or primarily economic. The great divisions among humankind and the dominating source of conflict will be cultural. Nation states will remain the most powerful actors in world affairs, but the principal conflicts of global politics will occur between nations and groups of different civilizations. The clash of civilizations will dominate global politics. The fault lines between civilizations will be the battle lines of the future.