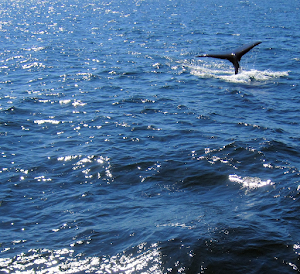 (I took this off the coast of Boston.)

This is progressive Christianity, re-interpreting the cross to be palatable to our secular culture.

Alisa Childers writes: Despite the abundance of biblical testimony, "the one thing that virtually all progressive Christian thought leaders agree on is that Jesus didn’t die to pay the penalty for our sin. He was crucified by an angry mob for speaking truth to power, and his love and forgiveness toward those who killed him is the example we all should follow. According to progressive Christians, Jesus didn’t need to die, but he submitted himself to the will of the people. According to their wisdom, the historic view makes God nothing more than an abusive father.” (Childers, p. 206)

If Christ did not die to atone for our sins, which have separated us from God, then...

... What could Isaiah have been thinking when he wrote, “Your iniquities have made a separation between you and your God, and your sins have hidden his face from you” (Isa. 59:2).

... How does the biblical idea of “repentance” [TURN!] make any sense if unrepentance (holding on to sin) is not widening the separation between us and a holy God?

... What meaning can “reconciliation” have if it doesn’t imply two separated, at-odds-with-each-other, beings?

... What sense will Romans 5:10 have if, we have never been separated from God? For if, while we were God’s enemies, we were reconciled to him through the death of his Son, how much more, having been reconciled, shall we be saved through his life!

Doesn’t the idea of gaining access to peace with God (shalom, like two separated hands coming together in a handshake) imply a condition of not being at peace with God? Like, enemies of God?

Will not there be, at the final judgment, a great separation of humanity from God or, as C.S. Lewis called it, a “great divorce?”

25 God presented Christ as a sacrifice of atonement, through the shedding of his blood—to be received by faith. He did this to demonstrate his righteousness, because in his forbearance he had left the sins committed beforehand unpunished— 26 he did it to demonstrate his righteousness at the present time, so as to be just and the one who justifies those who have faith in Jesus.

And then there is the parable of the prodigal son, whose sinful choices separated him from his loving father.

And the joyful response of his father when the son returns home.

A denial of the atoning work of Christ, to pay the penalty we deserved because of our sin, is heterodoxy.

HERE IS WHAT I BELIEVE…

I believe all have sinned, and fall short of the glory of God.

I believe sin makes a separation between us and God, and us and others. (The wages of sin is death.)

I believe God’s holiness cannot be grasped without comprehending the nature of sin.

I believe the fundamental reason for the OT sacrifices is atonement, so that sinners could be forgiven by the holy One.

I believe the suffering of the Messiah was clearly prophesied. (See Isaiah 53. See The Gospel According to Isaiah.)

I believe Christ died for our sins.

I believe it was the will of God to die in the place of sinners.

I believe that the Cross was God’s idea.

I believe it was God who died in our place.

The Atonement, by William Lane Craig

Atonement and the Death of Christ, by William Lane Craig

The Nature of the Atonement: Four Views, ed. by James Beilby and Paul Eddy

Five Views on the Extent of the Atonement, ed. Andrew Louth