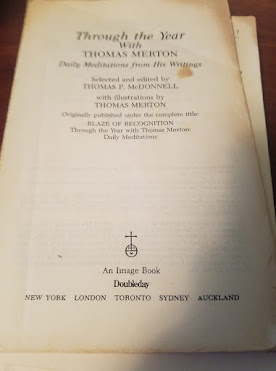 (My copy of the Thomas Merton devotional I have used for decades.)

The Rise and Triumph of the Modern Self: Cultural Amnesia, Expressive Individualism, and the Road to Sexual Revolution, by Cark Trueman.

This could be the most important book I read this year.

“The Rise and Triumph of the Modern Self is perhaps the most significant analysis and evaluation of Western culture written by a Protestant during the past fifty years. If you want to understand the social, cultural, and political convulsions we are now experiencing, buy this book, and read it for all it is worth. Highly recommended.”―Bruce Riley Ashford, Professor of Theology and Culture, Southeastern Baptist Theological Seminary; coauthor, The Gospel of Our King

Twitter and Tear Gas: The Power and Fragility of Networked Protest, by Zeynep Tufekci.

Tufekci explains in this accessible and compelling book the nuanced trajectories of modern protests—how they form, how they operate differently from past protests, and why they have difficulty persisting in their long-term quests for change.

Cynical Theories: How Activist Scholarship Made Everything about Race, Gender, and Identity - and Why This Harms Everybody, by Helen Pluckrose and James Lindsey.

"Many people are nonplussed by the surge of wokery, social justice warfare, intersectionality, and identity politics that has spilled out of academia and inundated other spheres of life. Where did it come from? What ideas are behind it? This book exposes the surprisingly shallow intellectual roots of the movements that appear to be engulfing our culture."

"If you want to know the philosophy behind cancel culture and why it is so creepy, get this book. Then, give it to your friends and family."

"Is there a school of thought so empty, so vacuous, so pretentious, so wantonly obscurantist, so stupefyingly boring that even a full-frontal attack on it cannot be read without an exasperated yawn? Yes. It is called postmodernism. If you sincerely want to understand what postmodernism is, read this exceptionally well-informed book by two noble heroes of the enlightenment project. If you have better uses for your neurons and your time, stick to science. It’s the real deal."

God, Stephen Hawking and the Multiverse: What Hawking Said and Why it Matters, by David Hutchings.

'The task of scientific popularization is an extremely difficult one, which very few are able to pull off successfully. But Hutchings and Wilkinson have shown themselves to be masters of the genre. Their book is an astonishingly good read, a gripping and thought-provoking account of the quest to probe the deepest mysteries of the universe.' - William Lane Craig
'If you have ever wanted to understand what Stephen Hawking was talking about but couldn't face the maths, this is the book for you. If you have ever felt uncomfortable that such an eminent scientist should dismiss the need for God, this is also the book for you. In an entertaining yet searching way, the authors put Hawking's work in perspective, scientifically, philosophically and theologically.' - Dr Althea Wilkinson, School of Physics and Astronomy, University of Manchester, UK

Inspired Imperfection: How the Bible's Problems Enhance its Divine Authority, by Greg Boyd.

"How do we read and trust a supposedly sacred book when its contradictions and moral ambiguities are so apparent? For all who struggle with these questions, this book is for you. Gregory A. Boyd's theological sojourn has imbibed various communities, experiences, and theological paradigms, all evident in these pages about his life-long grappling with Scripture." --Amos Yong, dean of the School of Theology and School of Intercultural Studies at Fuller Theological Seminary

The Decadent Society: How We Became the Victims of our Own Success, by Ross Douthat.

“Douthat’s best book yet, a work of deep cultural analysis, elegantly written and offering provocative thoughts on almost every page. It’s hard to think of a current book that is as insightful about the way we live now as is this one.” —Rod Dreher, The American Conservative

Moral Relativism: A Reader, by Paul Moser and Thomas Carson.

DEVOTIONAL BOOKS I AM NOW USING...

Hearing God Through the Year: A 365 Day Devotional (Dallas Willard)

A Year with C.S. Lewis: Daily Readings from His Classic Works

Through the Year with Thomas Merton

A Year with Thomas Merton: Daily Meditations from His Journals

A Change of Affection: A Gay Man's Incredible Story of Redemption, by Beckett Cook.

A War of Loves: The Unexpected Story of a Gay Activist Discovering Jesus, by David Bennett.

Christians in the Age of Outrage: How to Bring our Best when the World Is at its Worst, by Ed Stetzer.

Can We Still Believe the Bible? An Evangelical Engagement with Contemporary Questions, by Craig Blomberg.

Why Liberalism Failed, by Patrick Deneen.

God and the Pandemic: A Christian Reflection of the Coronavirus and its Aftermath, by N. T. Wright.

The Anatomy of Facism, by Robert Paxton.

"So fair, so thorough and, in the end, so convincing, it may well become the most authoritative . . . study of the subject. . . . A splendid book." –The New York Times Book Review"Useful and timely. . . . Mussolini and Hitler were the prototypical fascist leaders, and Paxton chronicles their rise to power--and their global influence and ultimate fall--with a brilliant economy." –San Francisco Chronicle"A deeply intelligent and very readable book. . . . Historical analysis at its best." –The Economist

When Narcissism Comes to Church: Healing Your Community from Emotional and Spiritual Abuse, by Chuck DeGroat.

Until Christ is Formed in You: Dallas Willard and Spiritual Formation, Stephen Porter and Gary Moon.