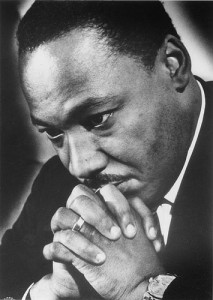 As our nation pauses to honor Dr. Martin Luther King, Jr., we will celebrate his great civil and political influence. But we will hear little of his own understanding of the source of that influence. The fire burning deep in King’s soul was his relationship with God, which was fanned by his constant prayer life. Few scholars have attended to this, says Lewis Baldwin of in his book Never to Leave Us Alone: The Prayer Life of Martin Luther King, Jr. corrects this.

I remember reading, for the first time, King’s “Letter from Birmingham Jail.” I knew King was a Christian, but his spiritual life was never talked about in the media. We saw film and photos of King praying in the city streets, but were not told how much this meant to him. His “Letter” gmoved me. I saw that King was an intellectual, a genius, a brilliant writer, and most importantly,  a fundamentally spiritual being and follower of Jesus. The social activism of Martin Luther King, Jr., was a function of a life grounded in God and prayer, which he defined as “conversing with God.”

Prayer was more than a theory or some religious thing for King. King had an actual prayer life, contrary to many religious leaders who talk about praying but don’t find time to do it. He saw prayer as necessary for changing his own life, and the prevailing culture. Baldwin, the great King scholar, shows that King never separated moral responsibility from a deep personal spirituality and piety. Prayer, for King, was conversation with God.

Once King received a phone call at midnight from a racist who called him a “*n-------,” threatened to kill him, and “blow up” his home This deeply disturbed him, and he was unable to sleep. He discovered that all the intellectual things he learned in the university and seminary could not help him overcome this. Baldwin writes that King turned to God in prayer and had a face-to-face encounter with what is, in the tradition of his forebears, called a “Waymaker.” This God-encounter exposed his fears, insecurities, and vulnerablities. He then found great comfort as an “inner voice” spoke to him, reminding him that he was not alone, commanding him to stand up for righteousness, justice, and truth, and assuring him that, “lo, I will be with you, even to the end of the world.”

It is important to understand King’s position on spiritual things if we want to grasp his societal accomplishments. King, who earned a PhD at Boston University, knew that intellectual accomplishments were not enough to transform self and society. God was needed, and prayer was a matter of “invoking the supernatural.” Baldwin writes that “King taught the people of Montgomery that the weapon of prayer was ultimately more powerful and effective than any gun or bomb.”

King spent much time alone in prayer. He told students that if you don’t have a deep life of prayer, you have no business preaching to others. King saw himself as essentially involved in a “spiritual movement,” not simply a struggle for equal rights, social justice, and peace.

King knew, existentially, that real prayer involves “a profound surrender of the self to God, not prayer rooted in self-pride, self-righteousness, and self-centeredness.” That becomes the kind of relationship with God that can transform the fabric of reality.

Leadership is influence. Therefore, King was one of our nation’s greatest leaders. Baldwin brings us to the source of that influence, which was: King’s own soul-receptivity to the powerful, transforming influence of God. “King,” writes Baldwin, “was effective because his praying and preaching were effective. True leadership in his case made prayer and preaching indispensable.”

You won't hear any of this in the secular media. Why not?

***
My recent book is Praying: Reflections on 40 Years of Solitary Conversations with God.