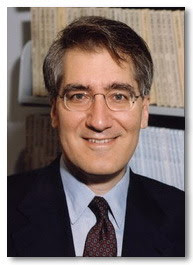 Tonight I'm reading some of the natural law reasonings of Princeton jurisprudential philosopher Robert George. Here's some good reasoning about the issue of abortion from George.
“Some politicians say that they’re ‘personally opposed’ to abortion, yet ‘pro-choice,’” says the 48-year-old professor of constitutional law and moral philosophy. “But we must ask: Is this a position that can survive the test of logical coherence? After all, if abortion is wrong, surely it is wrong because it is the unjust taking of the life of a developing human being.” He pauses to let that sink in and then launches another question: “And if one believes that, then what could possibly justify a regime of law that licenses so grave an injustice?”
Here's George the Princeton professor in class:
George hoists a foot onto the chair back, plants his forearms onto his knee, and fires off another round of questions: Is it morally acceptable to conduct research on embryos not yet implanted in the uterus, even if the embryos must then be killed? What about so-called spare embryos in frozen storage, which have no prospect of implantation? Is abortion ever morally justified, despite its homicidal character?
Students begin offering tentative answers — but not before they've taken a moment to think. As smart as these kids are, after half a semester in George's Civil Liberties class, they've learned not to blurt out a thoughtless opinion: George will force them to defend it, which could prove embarrassing.
One bespectacled youth speaks up: "I don't think I was an embryo," he announces. His classmates chuckle, but George responds seriously. "You weren't an embryo. Were you a fetus? Were you an adolescent?"
“I am not a physical organism,” the young man insists; he is his ideas, beliefs, and desires.
George pounces on the person/body dualism implicit in this remark and forces the class to confront the implications of affirming it: "If 'I' was not an embryo or fetus, neither was 'I' once an infant," he says. "To have destroyed the fetus or infant that later became 'me' would not have been to destroy me. So at what point then do we say 'I' began to exist? At what point do we draw the line on killing?"
George then drops a cerebral smart bomb: "If dualism is true, the answer won't be 'birth,'" he notes. Will it be six months after birth? A year? Two years? Three? After all, when does a child achieve thoughts, beliefs, and desires?
Pro-choice students must now confront an uncomfortable fact: The logical implications of their position entail believing that killing three-year-old children is morally acceptable."
Sounds like a fun class to me!
Posted by John Piippo at 9:06 PM