Nietzsche's "Parable of the Madman" 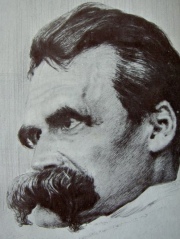 (I re-post this periodically.)

It's no secret that, among atheists, Nietzsche ranks as one of my favorites. I'm not being flippant about this. He was brilliant. If I was an atheist (which I'm not), I would orbit around him.

Atheist Peter Watson, in his book The Age of Atheists, presents Nietzsche as the beating heart behind all atheism that comes after him. Nietzsche is the prototype of current intellectual atheism.

In the Fall 2018 semester I taught my final Philosophy of Religion class. In that class I presented  Nietzsche's famous "Parable of the Madman," from his book The Joyful Wisdom. I expected my students to know the following.

The basic point is: Atheism overreaches if it claims one can secure objective morality on the non-existence of God. (See, e.g., Atheist Overreach: What Atheism Can't Deliver.)

EXPLAIN NIETZSCHE'S "PARABLE OF THE MADMAN"

1. Spell 'Nietzsche.' (I once put this question on a written exam. I was pleased that 95% of my students got the answer right. It is a mark of good teaching when nearly all students get the correct answer. What is the value of being able to spell 'Nietzsche'? Imagine you are dating someone you want to break up with, but don't know how. On your next date tell them, "I can spell 'Nietzsche'." Then, spell it. The relationship will be over at that point. The ball will be in the other's court, and they will be looking for ways to break up with you. Or, in an unlikely turn of events, they will believe they have finally found their soul mate.)

2. Explain what Nietzsche means by "the horizon of the infinite.'

This is one way of expressing Nietzsche's struggle with nihilism. "Nihilism" is the belief that life has no meaning.

3. Explain the "parable of the madman."


I'm not an atheist. Were I one, I'd be sailing in the lonely, drifting boat with Nietzsche (if he would have me), struggling with and against nihilism, the rest of my days. And, hopefully, I would understand that not only moral values, but the very idea of "value" at all, is not part of my world.
*****
Some notes from Stephen Williams, The Shadow of the Antichrist, pp. 118 ff.

Nietzsche's parable tells us:
From his lonely outpost, Nietzsche announces a cataclysm. He is an atheist-prophet, who has been compared to John the Baptist. "Nietzsche has actually been called 'that unbalanced John the Baptist of the modern world.'" (Ib., 120)

For Nietzsche, the death of God, and the end of Christian theism, means that, "intellectually, it all has ended." (Ib.) "We have arrived at the close of an epoch." (Ib.) In Human, All Too Human Nietzsche writes: "There will never again be a life and culture bounded by a religiously determined horizon." (In Ib., 121) Which means: no metaphysical propositions, which includes moral propositions. (How could a rational atheist tell anyone they are "wrong" in an objective sense?)