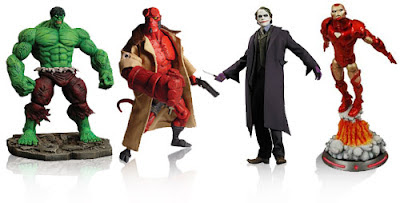 Currently superheroes are big. Nytimes film critic A. O. Scott calls it the "superhero surge." Why the surge?

For one reason, says Sancton, we humans can relate to them. Sancton writes: "the heroes themselves have become more, well, complex. The films still pit good against evil, but with character actors like Robert Downey Jr. and Heath Ledger taking more risks, good has gotten more ambiguous and evil more unsettling."
Further, just as we are struggling economically and politically and globally, so are our superheroes. "Hancock’s a drunk, Tony Stark’s a war-profiteer, and Bruce Wayne’s a rich jerk. Wouldn’t you be messed up if you were fighting, respectively, L.A. crime, the Taliban, and Al Qaeda in clown makeup?"

And then there's Hellboy. "Hellboy’s inner demon is that he’s an outer demon. O.K., that’s not quite as easy to relate to, but he’s nonetheless an irritable, cynical hero, and audiences like that."
Superheroes portray the ethos of the time. When Superman arrived to help us the world was simpler and black and white. Good was good and evil was evil. Now, there's a lot more ambiguity and complexity. And this I believe is true. As we Jesus-followers like to say it's a post-Christian world that we live in. The spiritual "air we breathe" is highly polluted.

But what about the whole superhero thing anyway, in itself? Sancton's observation is that we need them. Quoting Hellboy's director Guillermo del Toro: "There is still a longing for mythos, for a spiritual Pantheon. And in an era where we have enshrined materialism to such a degree and we have killed off every conceit that seems to be weak and based on religion—New Age, all those types of things—the only sort of acceptable mythology, I think, is superhero mythology.”

In short - superheroes are our gods and goddesses. It's not that people actually believe Hellboy exists or that the Joker is around the corner and we'd better hope the psychologically struggling Batman sees the bat-signal we throw up and is in an emotional state to respond to it. It's that most of us, arguably all, have this deep, inner need for someone or something more to come to our rescue. For me, it's the Jesus-story, with the main difference being Jesus actually came to deliver the oppressed. Perhaps, as C.S. Lewis thought, the superhero stories, and even his own Narnia books and his friend Tolkien's trilogy, were reflections of a hope God placed in each of us and responded to in history.
Posted by John Piippo at 12:00 AM