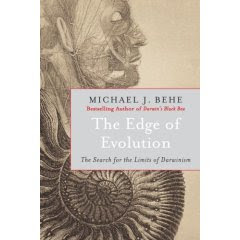 Cameron Wybrow writes, in The Philadelphia Enquirer, that Michael Behe's new book, The Edge of Evolution: The Search for the Limits of Darwinism, "makes a serious, quantitative argument about the limits of Darwinian evolution. Evolutionary biology cannot honestly ignore it."
Wybrow takes to task, e.g., Richard Dawkins's "review" of Behe's book. In his review "the science [of Behe's argument] is barely touched." And re. atheist Michael Ruse's review of Behe, "it's not clear that he [Ruse] has even opened the cover of the book."
Wybrow writes: "Behe... provides some hard numbers, coupled with an ingenious argument. The key to determining the exact powers of Darwinian evolution, says Behe, lies with fast-reproducing microbes. Some, such as malaria, HIV, and E. coli, reproduce so quickly that within a few decades, or at most a few millennia, they generate as many mutations as a larger, slower-breeding animal would in millions of years. By observing how far these creatures have evolved in recent times, we can estimate the creative limits of random mutation.
In the case of malaria, the creative limits appear quite low. Over the last few thousand years, several thousand billion billion malarial cells have been unable to develop an evolutionary response to the sickle-cell mutation, which protects its human bearers from malaria. On the other hand, malaria has proved able to develop Darwinian resistance to the antibiotic chloroquine. This resistance is based upon two simultaneous mutations affecting a malarial protein. Yet this rare double mutation has occurred fewer than 10 times since chloroquine was introduced 50 years ago, during which time a hundred billion billion malarial cells have been born. If this indicates the typical rate of occurrence of double mutations, then the Darwinian transformation of our pre-chimp ancestor into homo sapiens, which would have required at least some double mutations, would have taken at least a thousand trillion years, a time span greater than the age of the universe.
Drawing upon parallel mutation studies of HIV and E. coli for confirmation, Behe concludes that random mutations cannot explain the origin of most of the complex structures in living things. He concedes that Darwinian processes can make new species, but argues that they are incompetent to generate new kingdoms, phyla, or classes. The creative limit, the "edge of evolution," lies somewhere between the level of species and the level of class. Darwinian processes can account for the difference between a dog and a wolf, maybe even a dog and a bear, but not the difference between a lizard and a bird. Something other than random mutation must have produced such differences; for Behe, the "something" is intelligent design."
Posted by John Piippo at 9:59 PM