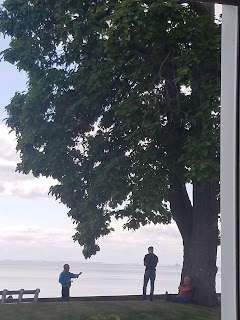 Me: (I present the Jesus story to the progressive Christian.)

Progressive Christian: "That's your narrative. My narrative is different."

To do that is to engage in Christological studies.

I am interested in Historical Jesus studies. In terms of Jesus, I am uninterested in viewing the Gospels like a Rohrshach Test that measures our subjective feelings about the four Gospels.

I had a progressive Christian tell me, in an intoxicated postmodern moment, that we all ought to just sit around the table and share our narratives about Jesus. That's not for me, unless I am counseling someone. Or something like this. Then, I can begin by hearing their story. But I am not there to "affirm" their story. I'm not there to say, 'Wow - you see things differently!"

No one does Historical Jesus studies that way. I have a pile of key books written by Christological scholars. Not one of them contains a chapter called, "Other Peoples' Social constructs About Jesus."

Criticism about postmodernism is not just a Christian thing. See, e.g., the recent book by atheists Helen Pluckrose and James Lindsay, Cynical Theories: How Activist Scholarship Made Everything About Race, Gender, and Identity - and Why This Harms Everybody. They write,

"We begin in the late 1960s, when the group of theoretical concepts clustered around the nature of knowledge, power, and language that came to be known as postmodernism emerged from within several humanities disciplines at once. At its core, postmodernism rejected what it calls metanarratives—broad, cohesive explanations of the world and society. It rejected Christianity and Marxism. It also rejected science, reason, and the pillars of post-Enlightenment Western Democracy." (No, I am not pro-Marxist. But Marxism, and any forms of Hegelianism, put forth a metanarrative of how reality is, not as some social construct.)

"The progressive left has aligned itself not with Modernity but with postmodernism, which rejects objective truth as a fantasy dreamed up by naive and/or arrogantly bigoted Enlightenment thinkers who underestimated the collateral consequences of Modernity’s progress...

Postmodernism has, depending upon your view, either become or given rise to one of the least tolerant and most authoritarian ideologies that the world has had to deal with since the widespread decline of communism and the collapses of white supremacy and colonialism."

Can anything good come out of postmodernism, in terms of Christianity? James K. A. Smith does his best to find something good here.

Ironically, to me at least, I side more with Richard Dawkins, who writes (his blurb for Pluckrose's book): "Is there a school of thought so empty, so vacuous, so pretentious, so wantonly obscurantist, so stupefyingly boring that even a full-frontal attack on it cannot be read without an exasperated yawn? Yes. It is called postmodernism."