"Hotel Rwanda" was a hard movie to watch. It was about the Rwandan genocide, in which over a million people were murdered.

Today's nytimes has an article called "Portraits of Reconciliation." Photographer Pieter Hugo took pictures of Hutus and Tutsis who have gone through reconciliation counseling. Here are some of the photos with explanation. 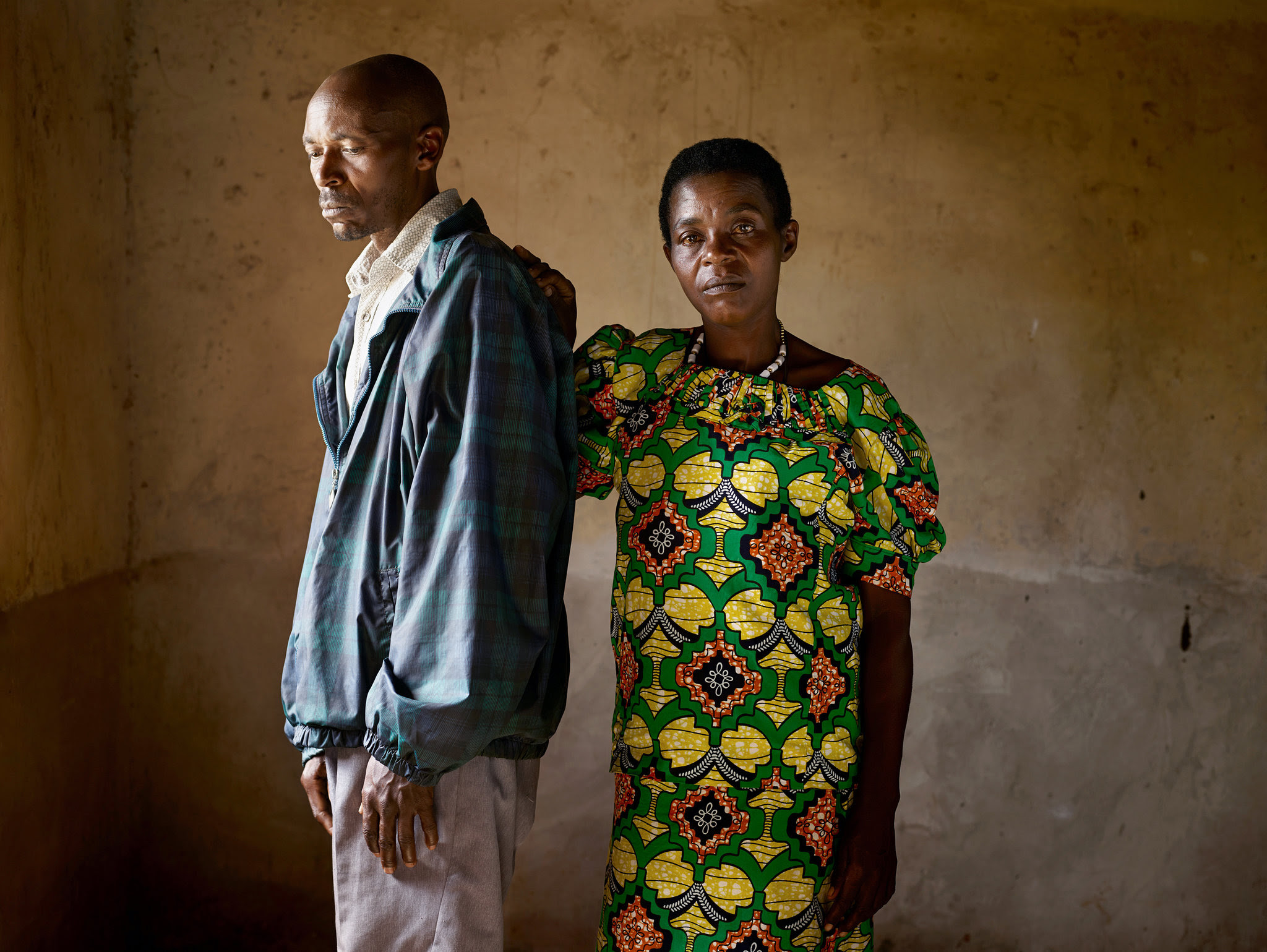 Jean Pierre KarenziPerpetrator (left)Viviane NyiramanaSurvivor
KARENZI: “My conscience was not quiet, and when I would see her I was very ashamed. After being trained about unity and reconciliation, I went to her house and asked for forgiveness. Then I shook her hand. So far, we are on good terms.”
NYIRAMANA: “He killed my father and three brothers. He did these killings with other people, but he came alone to me and asked for pardon. He and a group of other offenders who had been in prison helped me build a house with a covered roof. I was afraid of him — now I have granted him pardon, things have become normal, and in my mind I feel clear.” 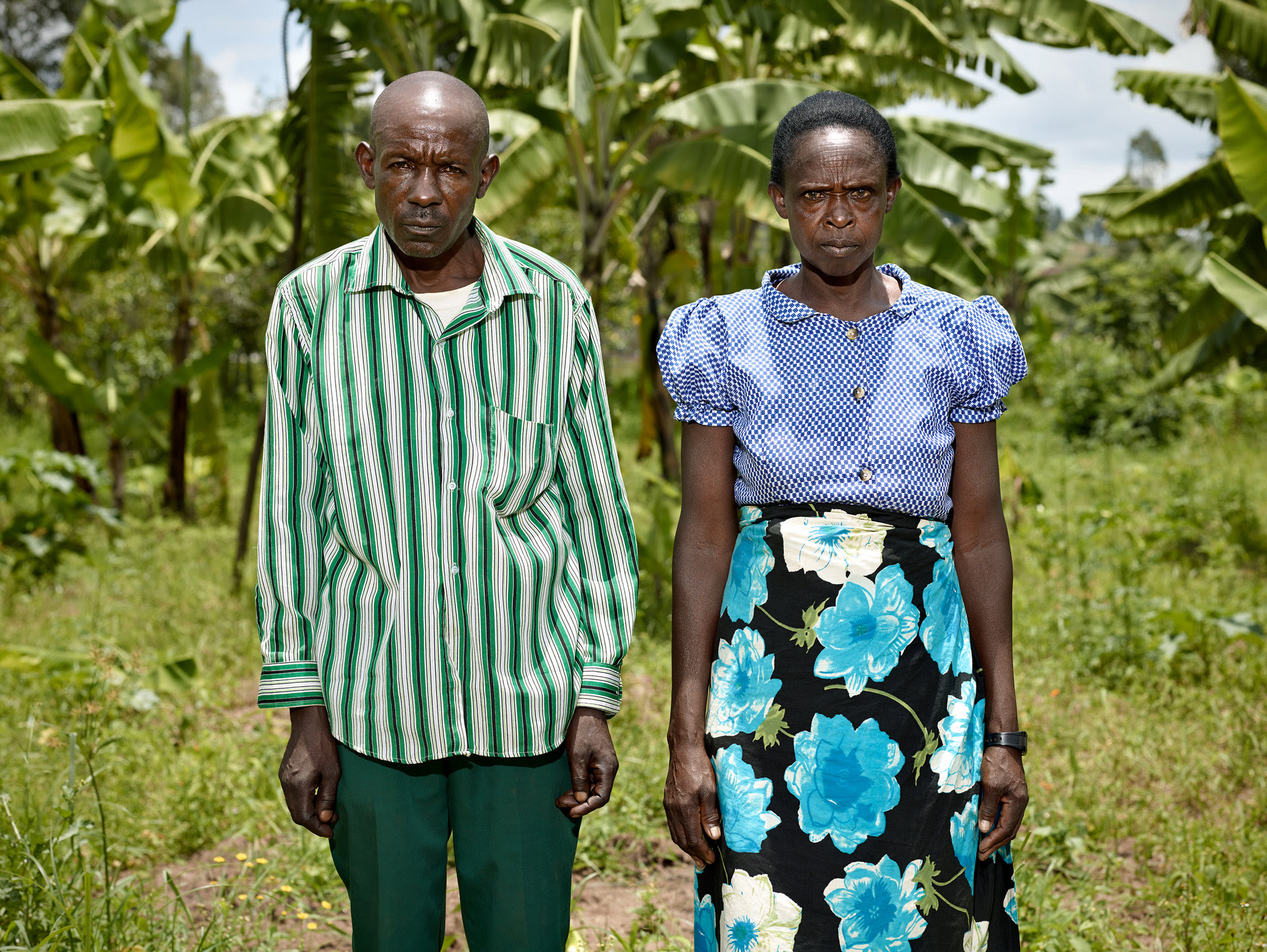 Godefroid MudaheranwaPerpetrator (left)Evasta MukanyandwiSurvivor
MUDAHERANWA: “I burned her house. I attacked her in order to kill her and her children, but God protected them, and they escaped. When I was released from jail, if I saw her, I would run and hide. Then AMI started to provide us with trainings. I decided to ask her for forgiveness. To have good relationships with the person to whom you did evil deeds — we thank God.”
MUKANYANDWI: “I used to hate him. When he came to my house and knelt down before me and asked for forgiveness, I was moved by his sincerity. Now, if I cry for help, he comes to rescue me. When I face any issue, I call him.” 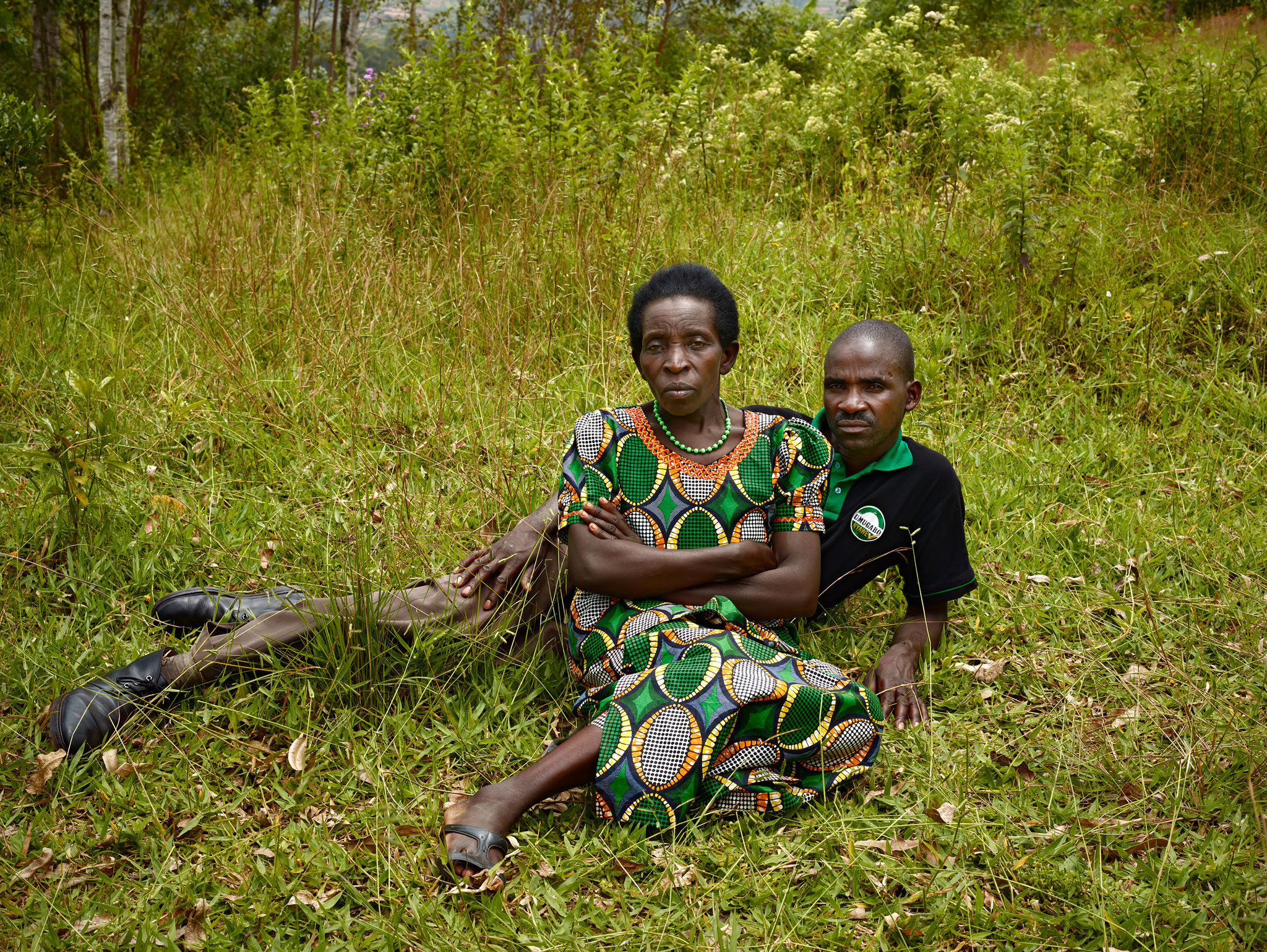 Juvenal NzabamwitaPerpetrator (right)Cansilde KampunduSurvivor
NZABAMWITA: “I damaged and looted her property. I spent nine and a half years in jail. I had been educated to know good from evil before being released. And when I came home, I thought it would be good to approach the person to whom I did evil deeds and ask for her forgiveness. I told her that I would stand by her, with all the means at my disposal. My own father was involved in killing her children. When I learned that my parent had behaved wickedly, for that I profoundly begged her pardon, too.”
KAMPUNDU: “My husband was hiding, and men hunted him down and killed him on a Tuesday. The following Tuesday, they came back and killed my two sons. I was hoping that my daughters would be saved, but then they took them to my husband’s village and killed them and threw them in the latrine. I was not able to remove them from that hole. I knelt down and prayed for them, along with my younger brother, and covered the latrine with dirt. The reason I granted pardon is because I realized that I would never get back the beloved ones I had lost. I could not live a lonely life — I wondered, if I was ill, who was going to stay by my bedside, and if I was in trouble and cried for help, who was going to rescue me? I preferred to grant pardon.” 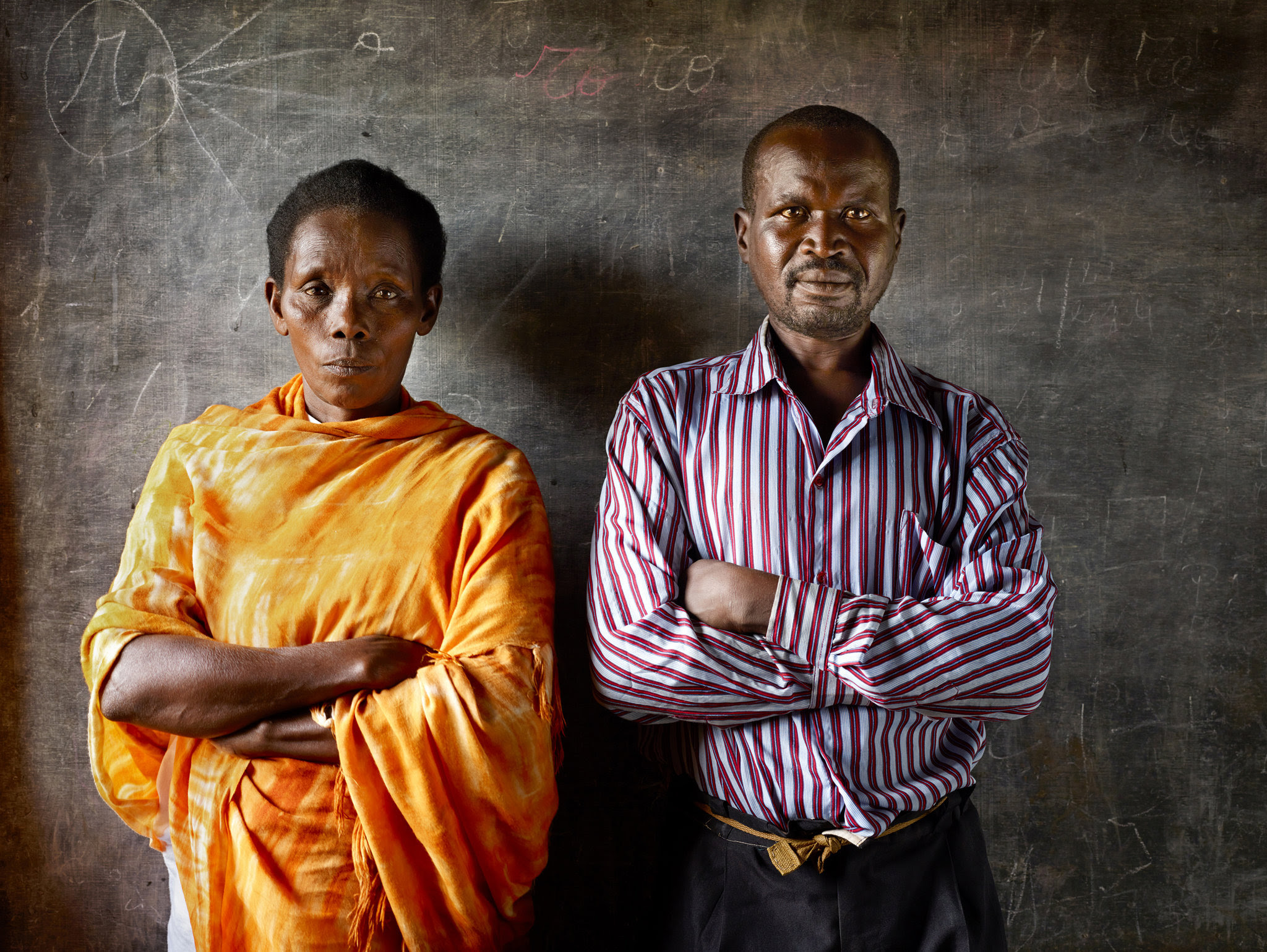 Deogratias HabyarimanaPerpetrator (right)Cesarie MukabuteraSurvivor
HABYARIMANA: “When I was still in jail, President Kagame stated that the prisoners who would plead guilty and ask pardon would be released. I was among the first ones to do this. Once I was outside, it was also necessary to ask pardon to the victim. Mother Mukabutera Caesarea could not have known I was involved in the killings of her children, but I told her what happened. When she granted me pardon, all the things in my heart that had made her look at me like a wicked man faded away.”
MUKABUTERA: “Many among us had experienced the evils of war many times, and I was asking myself what I was created for. The internal voice used to tell me, ‘‘It is not fair to avenge your beloved one.’’ It took time, but in the end we realized that we are all Rwandans. The genocide was due to bad governance that set neighbors, brothers and sisters against one another. Now you accept and you forgive. The person you have forgiven becomes a good neighbor. One feels peaceful and thinks well of the future.” 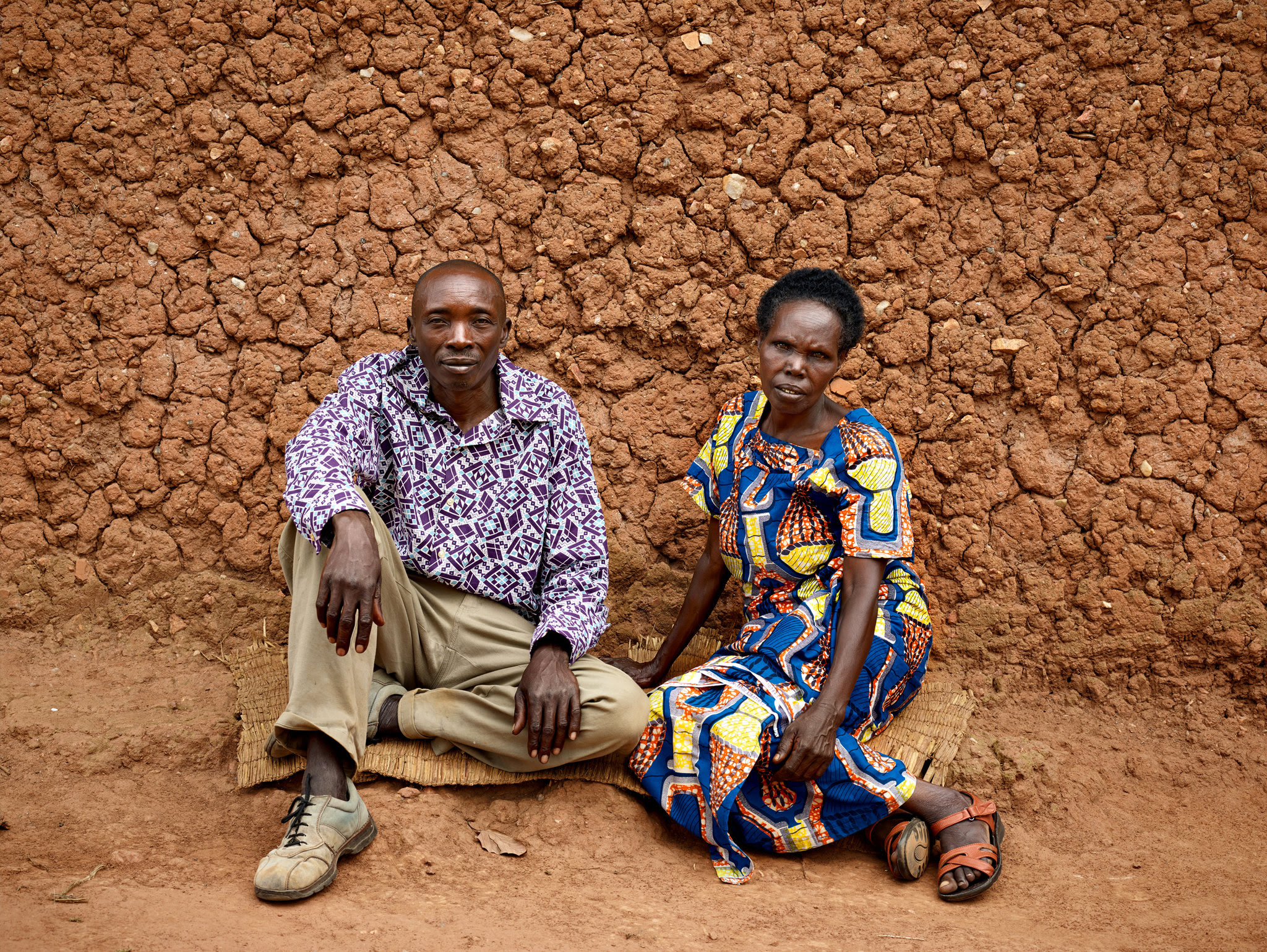 François NtambaraPerpetrator (left)Epiphanie MukamusoniSurvivor
NTAMBARA: “Because of the genocide perpetrated in 1994, I participated in the killing of the son of this woman. We are now members of the same group of unity and reconciliation. We share in everything; if she needs some water to drink, I fetch some for her. There is no suspicion between us, whether under sunlight or during the night. I used to have nightmares recalling the sad events I have been through, but now I can sleep peacefully. And when we are together, we are like brother and sister, no suspicion between us.”
MUKAMUSONI: “He killed my child, then he came to ask me pardon. I immediately granted it to him because he did not do it by himself — he was haunted by the devil. I was pleased by the way he testified to the crime instead of keeping it in hiding, because it hurts if someone keeps hiding a crime he committed against you. Before, when I had not yet granted him pardon, he could not come close to me. I treated him like my enemy. But now, I would rather treat him like my own child.” 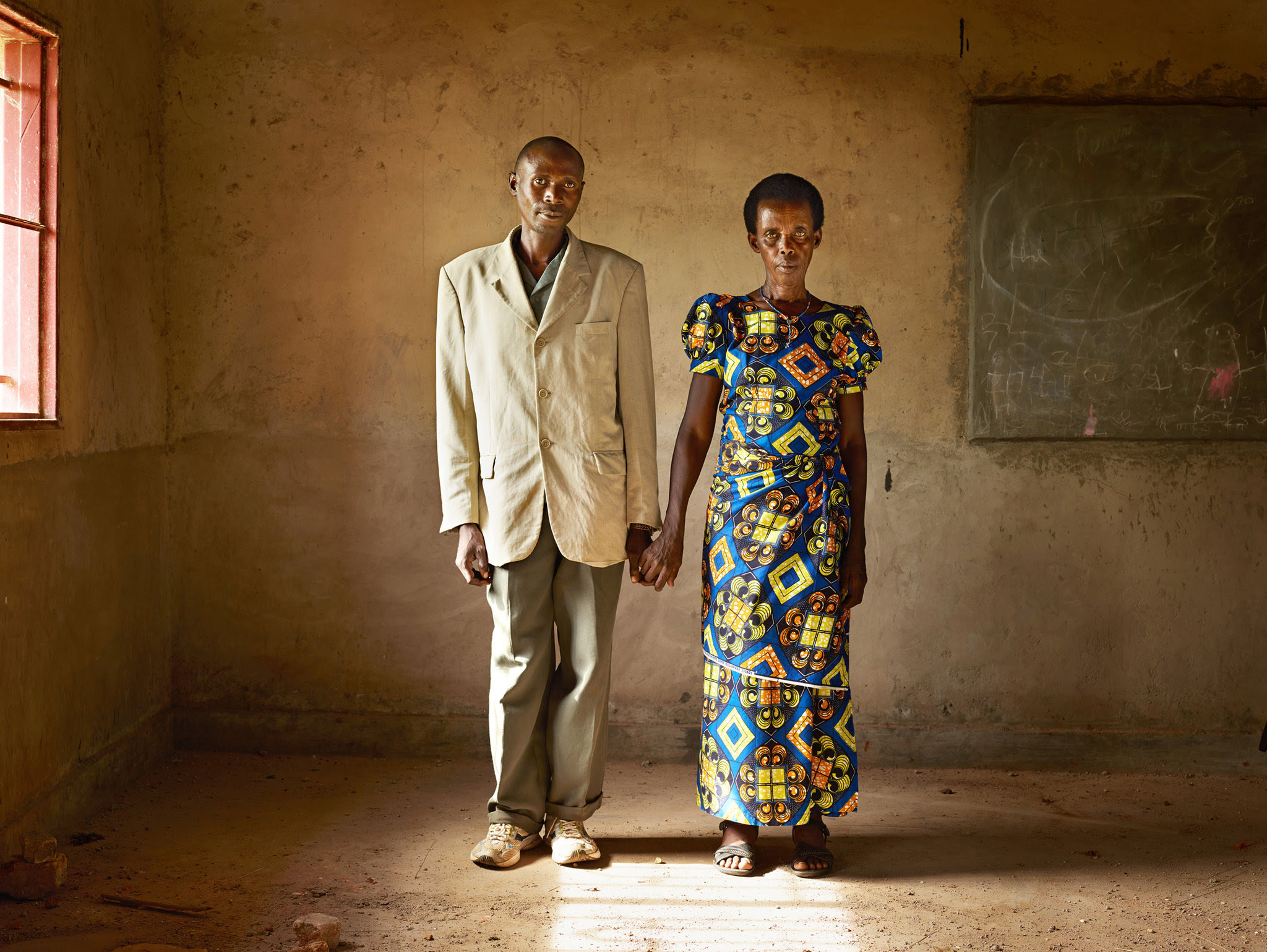 Dominique NdahimanaPerpetrator (left)Cansilde MunganyinkaSurvivor
NDAHIMANA: “The day I thought of asking pardon, I felt unburdened and relieved. I had lost my humanity because of the crime I committed, but now I am like any human being.”
MUNGANYINKA: “After I was chased from my village and Dominique and others looted it, I became homeless and insane. Later, when he asked my pardon, I said: ‘I have nothing to feed my children. Are you going to help raise my children? Are you going to build a house for them?’ The next week, Dominique came with some survivors and former prisoners who perpetrated genocide. There were more than 50 of them, and they built my family a house. Ever since then, I have started to feel better. I was like a dry stick; now I feel peaceful in my heart, and I share this peace with my neighbors.” 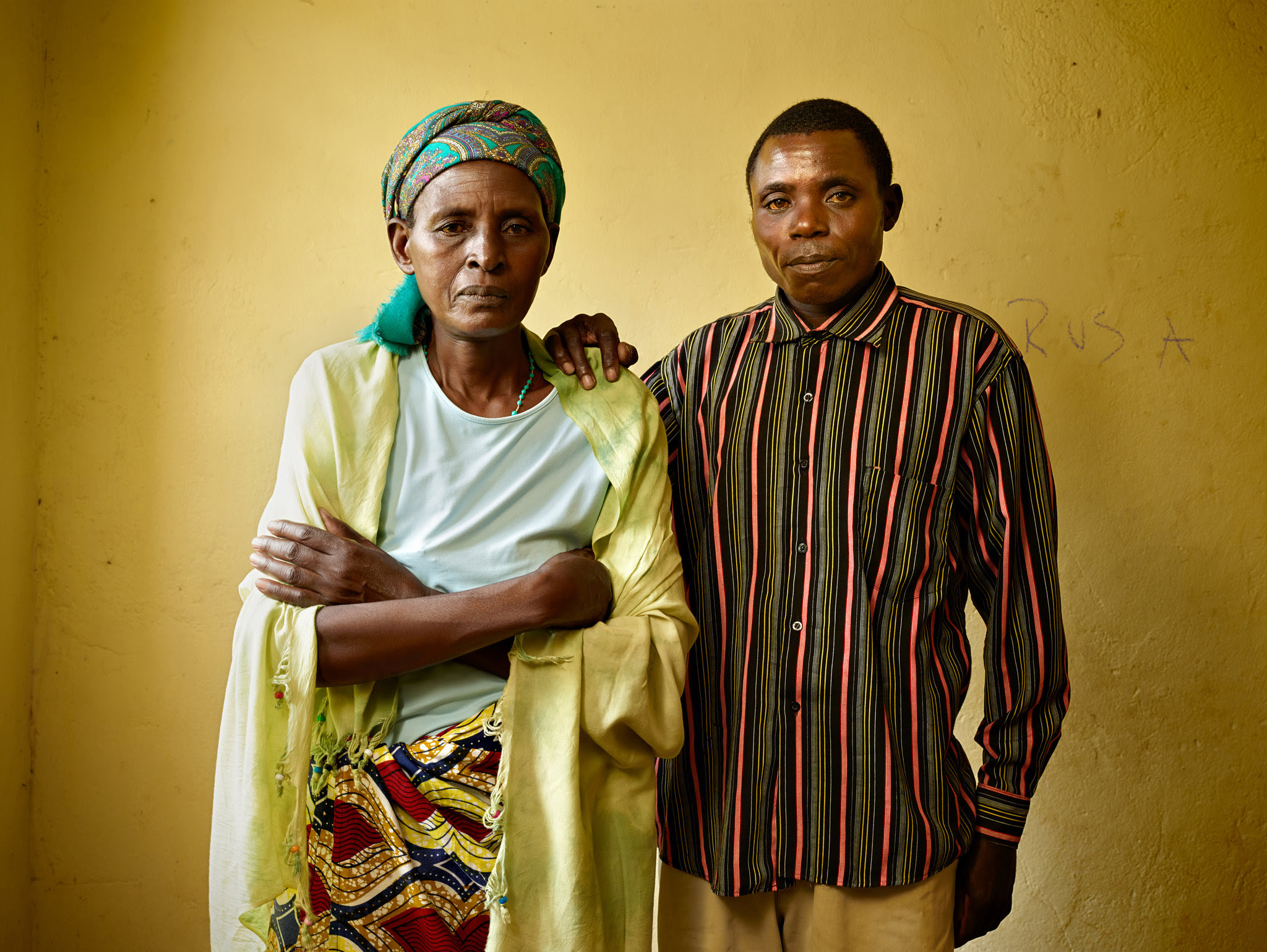 Laurent NsabimanaPerpetrator (right)Beatrice MukarwambariSurvivor
NSABIMANA: “I participated in destroying her house because we took the owner for dead. The houses that remained without owners — we thought it was better to destroy them in order to get firewood. Her forgiveness proved to me that she is a person with a pure heart.”
MUKARWAMBARI: “If I am not stubborn, life moves forward. When someone comes close to you without hatred, although horrible things happened, you welcome him and grant what he is looking for from you. Forgiveness equals mercy.”
Posted by John Piippo at 6:33 PM