45 years ago I left the little university bar band I was playing in, and also stopped drinking alcohol. For me the two always went together. These are two of the social consequences of my becoming a follower of Jesus.

One of my bar-band members was Dave. When I sat with the band and told the guys I was leaving, Dave said nothing. I interpreted that to mean: Dave doesn't like me anymore. The truth was I could not sing those moral-anomie songs anymore. My heart was changing. I was being rescued by Jesus out of a long darkness. I was breaking free of the inner cesspool! I was hoping my band would support that.


I had been drinking and drugging. I left it all behind. This means I left some friends behind. This is a necessary consequence accompanying inner change. I won't be doing that stuff any more. So I won't be hanging with people who did it. Some of my former friends were disgusted with me. I wasn't interested in judging anyone. I just wanted support for my prison break.

14Do not be yoked together with unbelievers. For what do righteousness and wickedness have in common? Or what fellowship can light have with darkness? 15What harmony is there between Christ and Belial? What does a believer have in common with an unbeliever? 16What agreement is there between the temple of God and idols?
For we are the temple of the living God. As God has said: "I will live with them and walk among them, and I will be their God, and they will be my people.”
17"Therefore come out from them
and be separate, says the Lord.
Touch no unclean thing,
and I will receive you."
18"I will be a Father to you,
and you will be my sons and daughters, says the Lord Almighty.”

Paul writes these words to the new Greek Jesus-followers in Corinth. Some of them have not understood the inexorable social ramifications of following Jesus as Lord. The Corinthians were still participating in pagan temple worship and sacred prostitution. What's wrong with that? They didn't understand, or didn't want to understand, that to follow something always means to leave some things behind.

Paul is saying: Do not get into double harness with darkness. Darkness coupled with light will lead only into deeper darkness. 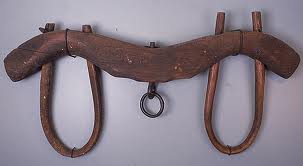 When two animals are equally yoked, they pull with equal desire and strength in the same direction. "Equally yoked" looks like this. 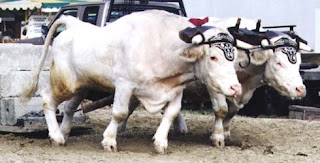 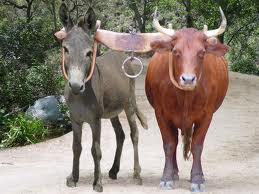 Deuteronomy 22:10 reads: Don't plow with an ox and a donkey yoked together. Because they will not plow straight, or they may pull in different directions. Or, the donkey might stubbornly refuse to pull at all.

So what is the big deal about dating an unbeliever? Or marrying one? Or going to sex-parties? Why can't "light" partner with "darkness?" Is compromise really so bad? Why not flirt a little with Belial? Paul's answer is: Because you are the temple of the living God. This realization means we no longer worship in other temples. We don't sing their songs anymore; we're not in "harmony" (Greek symphonesis; "with one voice") with the enemy; we no longer sing the worship songs of darkness.

No more alliance with spiritual contraries. Harnessing to someone who is spiritually incompatible evokes images of spiritual disaster. Linda and I see this, in marriages, all the time. It is more the rule than the exception.

If you bear Christ’s yoke you cannot bear it with those who deny Christ, or with those who could care less about Christ, or who aren’t pulling strongly in the direction of Christ. If you double-harness yourself to unbelievers you’ll find yourself plowing Satan’s field. You are a temple of the Holy Spirit. God dwells in you. Christ, the hope of glory, in within you. Do not expect Christ to think it's OK or cool to frolic a bit in the pastures of the enemy.

BTW - if you are a Real Jesus-Follower, then kiss "missionary dating" good-bye. This hardly ever works. To compromise is to fail. No one is impressed by it, unless your compromise gets them a little sex. If that happens be assured they won't be interested in your Jesus.

If you break free from the old idols some will hate you. But others, in their dark prison cells, will meet the God who is your Deliverer. Because they are looking for someone, anyone, who has succeeded in making the separation from anomie, idols, and Belial.

"I'll live in them, move into them;
I'll be their God and they'll be my people.
So leave the corruption and compromise;
leave it for good," says God.
"Don't link up with those who will pollute you.
I want you all for myself.
I'll be a Father to you;
you'll be sons and daughters to me."
The Word of the Master, God.
Posted by John Piippo at 2:49 PM