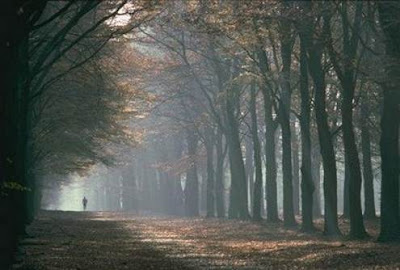 At times I have read or heard someone say that they are going through a "dark night of the soul," and by this refer to a time of personal suffering. This is not the "dark night" St John of the Cross was speaking of in the classic The Dark Night of the Soul.

To explain. John of the Cross was a mystic. "Mysticism" comes from the Greek word muo, which means "to conceal." There is, on mysticism, a way of "knowing" God that cannot be gained via things like the physical senses. Mystical literature speaks of such knowing as "dark knowledge."

John of the Cross, in The Ascent of Mount Carmel, writes: "The first night or purgation is of the sensual part of the soul, which is treated in the present stanza, and will be treated in the first part of this book. And the second is of the spiritual part; of this speaks the second stanza, which follows; and of this we shall treat likewise, in the second and the third part, with respect to the activity of the soul; and in the fourth part, with respect to its passivity." In the first "night" or "purgation" of the soul one's senses are "darkened." If one wants to know God in the sense of a God-encounter than this, precisely, cannot be gained via the 5 physical senses. They must be darkened.

For John of the Cross there are a series of darkenings, which then leafe the soul without any of its ordinary tools to rely on in the quest to know and be known by God. This is good, since, for a mystic like John, God cannot in principle be known this way. John writes: "And the second night, or purification, pertains to those who are already proficient, occurring at the time when God desires to bring them to the state of union with God. And this latter night is a more obscure and dark and terrible purgation, as we shall say afterwards." (Ascent)

The soul is purged of its active senses and eventually becomes passive, receptive. This is what Meister Eckhart means when he uses the word "Gelassenheit" to mean a passive "letting be," as opposed to an active grasping-after God. In the "Passive Night of the Senses" God purges the soul of its default ways of knowing. John calls this purgation "horrible," since in it we lose our normal way and can feel disoriented. But this is a holy disorientation, as we are being prepared for a unitive knowledge of God that cannot be gained with the separative physical senses. One experiences a great sense of loss, only to emerge into the greatest gain possible: knowledge of the ineffable God that comes to meet us.

The heart of John's "dark night" is expressed in these words:

"The night which we have called that of sense may and should be called a kind of correction and restraint of the desire rather than purgation. The reason is that all the imperfections and disorders of the sensual part have their strength and root in the spirit, where all habits, both good and bad, are brought into subjection, and thus, until these are purged, the rebellions and depravities of sense cannot be purged thoroughly."

I have long been attracted to the mystical tradition, for the following reasons.

The greatest danger of over-emphasizing mystical experience of God is that, at times, the mystical literature describes the contemplative union with God as an ontological union, a union of being. Here one gets "lost in God" to the extent that one is metaphysically the same as God. Surely, on Christian theism, there remains a metaphysical distance between us and God. Mysticism, at its extremes, conflates us and God so that we are ontologically one. I do not think that is true, nor do I find it helpful.

On another note, when I read the early pages of Dark Night I see similarities between the way our church and others worship. Reading sections of Dark Night remind me of the worship songs that are songs sung by the beloved to the Lover of our souls. To me that is very good, since there is a hymn-culture that more stresses the distance between us and God, thus taking the Emmanuel-encounter out of the church.
Posted by John Piippo at 10:32 AM