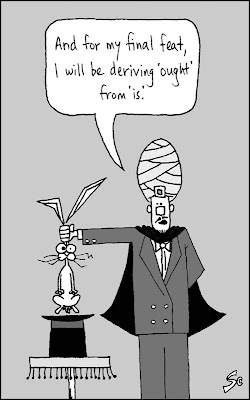 The "naturalistic fallacy" is the confused idea that moral conclusions can be drawn from scientific evidence. It is the belief that one can derive "ought" from "is."

Science qua science weighs, measures, and quantifies. Science can weigh the computer I am typing on, but science cannot tell me if it's a "good" computer, or if it's "beautiful." "Good" and "beautiful" are value judgments, about which science says nada.

Science qua science gives no information regarding value. "Value" includes truth, beauty, good (ethical goodness), evil, right, wrong, and meaning. For example, when Crick and Watson discovered DNA they reported the scientific data and added that the double helix structure was "elegant." In saying this they left science, for the moment. When theoretical physicist Robert Oppenheimer helped to create the nuclear bomb, he quoted the Bhagavad Gita and said, "Now I am become Death, the destroyer of worlds." Not a very scientific statement!

Science qua science does not give us morality. The chief domains of morality are theology and philosophy. We cannot help but speak morally. Inextricably, we are moral creatures. Moral discourse requires a metaphysical framework. One must not make the mistake of thinking that science, despite all its powers, will be of much help here.
Posted by John Piippo at 7:47 AM