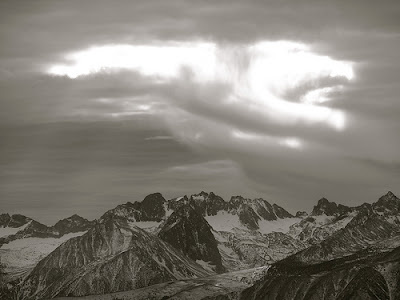 In my RMS "Kingdom of God" class today a student asked a question about I Thessalonians 4:13-18. I'm nearly done with N.T. Wright's new book, so I'm giving his answer as a way to get into the issue.
In I Thessalonians 4:13-18 we read:
13 Brothers, we do not want you to be ignorant about those who fall asleep, or to grieve like the rest of men, who have no hope. 14 We believe that Jesus died and rose again and so we believe that God will bring with Jesus those who have fallen asleep in him. 15 According to the Lord's own word, we tell you that we who are still alive, who are left till the coming of the Lord, will certainly not precede those who have fallen asleep. 16 For the Lord himself will come down from heaven, with a loud command, with the voice of the archangel and with the trumpet call of God, and the dead in Christ will rise first. 17 After that, we who are still alive and are left will be caught up together with them in the clouds to meet the Lord in the air. And so we will be with the Lord forever. 18 Therefore encourage each other with these words.
N.T. Wright, in Surprised By Hope: Rethinking Heaven, the Resurrection, and the Mission of the Church, comments on this passage. "The point to notice above all about these tricky verses is that they are not to be taken as a literal description of what Paul thinks will happen. Theya re simply a different way of saying what he is saying in 1 Corinthians 15:23-27 and 51-54, and in Philippians 3:20-21." (131)
Which means... what? In 1 Cor 15:23-27 Paul talks about the parousia of the Christ as the time of the resurrection of the dead. It's "the time when his present though secret rule will become manifest in the conquest of the last enemies, especially death." In vv. 51-54 Paul speaks of what will happen to those who are not yet dead when Jesus comes again. They will be changed, transformed.
Wright says "This is clearly the same event as he is speaking of in I Thessalonians 4; we have the trumpet in both, and the resurrection of the dead in both; but whereas in I Thessalonians he speaks of those presently alive being "snatched up in the air," in I Corinthians he speaks of them being "transformed."
In Philippians Paul speaks of the transformation of the present lowly body to be like Jesus' glorious body as a result of his all-conquering power." (131-132)
All three of these passages refer to the same thing. But why does Paul use the language he does in I Thessalonians about Jesus descending and people being caught up in the air? Wright writes: "I suggest that he is finding richly metaphorical ways of alluding to three other stories that he is deliberately bringing together. (Paul was good at richly mixed metaphors: in the next chapter, I Thessalonians 5, he says that the thief will come in the night, so the woman will go into labor, so you mustn't get drunk but must stay awake and put on your armor. As the television programs say, don't try that one at home.)" (132)
To conclude: Paul is not referring to 4-5 or more separate events but describing the same event using different language, some of it highly metaphorical. If this is not true then we seem to be committed to saying he's describing different events, which would be incoherent.
Posted by John Piippo at 2:03 PM