How An Atheist Faces Death 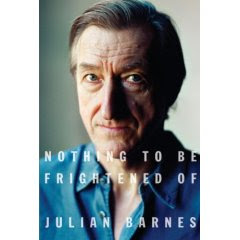 I have not read Julian Barnes' new book Nothing To Be Frightened Of, but I might. Barnes' book is about living in the face of death; it's "an extended meditation on human mortality."
Barnes is an atheist. His book serves as a way an atheist faces death. From the washingtonpost.com's review, here are some highlights.

Such is the life of an atheist. Were there no God, then life's no more than this. No God = no value, no purpose, no meaning. Barnes serves as a decent example of trying to live this way. And, given his own post-mortem views, his book will become a mostly un-read and forgotten thing itself.