Youth Are Not Flocking to the Mega-Churches 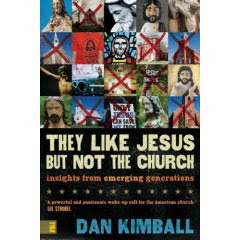 I'm reading Dan Kimball's They Like Jesus But Not the Church. Kimball points out that mega-churches have a lot of baby boomers but younger people are mostly absent from them. He talked, e.g., with the college pastor of a church that has well over 10,000 people in it. But the attendance of those under thirty is "rather dismal."
Kimball quotes Reggie McNeal, who writes: "We are witnessing the emergence of a new world... The phenomenon has been noted by many who tag the merging culture as post-Christian, pre-Christian, or postmodern. The point is, the world is profoundly different than it was at the middle of the last century, and everyone knows it. But knowing it and acting on it are two different things. So far the North American church has largely responded with heavy infusions of denial, believing the culture will come to its senses and come back around to the church."
McNeal writes: "The American culture no longer props up the church the way it did, no longer automatically accepts the church as a player at the table in public life, and can be downright hostile to the churches presence. The collapse I am talking about also involves the realization that the values of classic Christianity no longer dominate the way Americans believe or behave."
How true. I know this personally from teaching 8 years now at Monroe County Community College. For most of today's young students, the "church" is not even on the radar screen of options for them as they ask questions about the meaning and purpose of their lives.
Posted by John Piippo at 1:59 PM