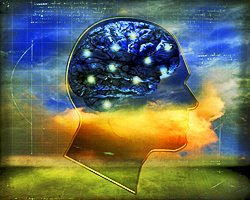 Mind-brain-consciousness studies are huge and getting huge-er. Is the "mind" nothing but the physical activity of the brain? Is conscious awareness nothing but the physical activity of the brain? Yesterday's Wall Street Journal moves in that direction.
It seems that "researchers now can detect our intentions and predict our choices before we are aware of them ourselves. The brain, they have found, appears to make up its mind 10 seconds before we become conscious of a decision -- an eternity at the speed of thought."
If that's true, then what of "consciousness" and "free will?" ""We think our decisions are conscious," said neuroscientist John-Dylan Haynes at the Bernstein Center for Computational Neuroscience in Berlin, who is pioneering this research. "But these data show that consciousness is just the tip of the iceberg. This doesn't rule out free will, but it does make it implausible.""
Free will... is implausible...??? Which brings me back to the same old thing related to what Steven Pinker called the "hard problem" of first-person subjective awareness. If the 10-second theory is correct then Haynes's "decision" to state "We think our decisions are conscious" was itself already a done deal in the physical brain.

My own belief is that with this kind of thinking we'll always run up against a self-refuting loop. This gets expressed in the WSJ article's last sentence: ""We are trying to understand who we are," said Antonio Damasio, director of the Brain and Creativity Institute at the University of Southern California, "by studying the organ that allows you to understand who you are.""
Posted by John Piippo at 10:11 PM