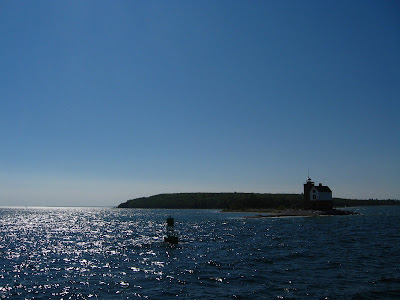 (I'm writing this from Mackinac island, where I took this picture of the Straits of Mackinac yesterday.)

Today a former philosophy student of mine wrote me the following:
"I was watching a television show on gay marriage and how they feel about what the bible says regarding it. According to them, the bible can't be taken literally and gay marriage is really OK in a Christian God's eyes. I believe you once told me that your doctoral thesis was on biblical interpretation, so I was wondering what you have to say on the subject. Also, the Bible states that if you see lustfully, then you should tear that eye out, what do you think about that?And what I think to be a tough one, if the Bible cannot be taken literally then what about Jesus rising from the dead? What if he rose from the dead spiritually and his friends didn't see him rise, but visualized him rising, or something like that?"
My response to him was as follows:
Here are some thoughts I have.
It's mistaken to take the Bible "literally," if "literal" means non-figuratively. Instead what's needed is to get at what the Bible is saying. In this regard many biblical things are "literal" in the sense that they describe actual historical events and historical times and historical places. Just to cite one out of countless examples, when in John chapter 9 we read the story of a blind man who was healed when Jesus told him to go and wash in the Pool of Siloam, there really was and still is a Pool of Siloam in Jerusalem. I was in Jerusalem a few months ago and saw it. Many, many examples can be given like this.
Was this blind man healed? I believe we can take that, also, literally; viz., the man was blind, and then as a result of meeting Jesus he could see.
But many biblical things must be taken figuratively precisely because they were intended to be taken figuratively. One example is the one you give - "if your eye causes you to sin, pluck it out." This is figurative language, and Jesus meant it that way. No one thought he meant that literally. But just because it's figurative does not mean it contains no truth. We often use figurative language to express truth. My Ph.D dissertation was on metaphor theory and figurative language. To cite but one of a billion examples, when we're watching a baseball game and the announcer says "The right fielder lost the ball in the sun" this is not to be taken to mean that the player was actually on the sun and lost the ball there. In interpreting the Bible, like any text, one must determine what's to be taken literally and what's to be taken figuratively. "Literal" is not "better" than "figurative," nor vice versa. The core issue is: what is the text saying? How did the people read the text; how did the people hear, e.g., what Jesus was saying?
All of this implies that someone who says "the Bible can't be taken literally" is making a nonsense statement. That isn't even the point of the whole thing. The point is: what does the text say? And, that there is literal truth and figurative truth, and one's not "better" than the other.
Re. homosexuality, the argument your note presents fails. It goes like this:
1. The Bible cannot be taken literally.
2. Therefore what the Bible says about homosexuality cannot be taken literally.
Premise 1 is false because essentially misguided.
Re. Jesus' resurrection, the biblical texts mean that literally Jesus was dead and then came back to life. The word "resurrection" is used to describe the literal event. "Resurrection," says theologian Wolfhart Pannenberg, is used metaphorically to speak of a literal event. We often use metaphor to speak of factual events because those events contain more meaning than the steel nets of literal language can hold. My doctoral dissertation (Northwestern, 1986) was on the nature of figurative and metaphorical truth.
Posted by John Piippo at 4:23 PM