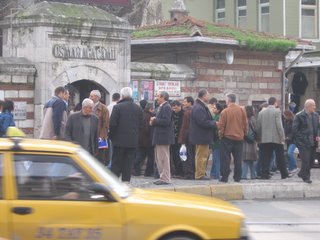 Istanbul is a sprawling city of 15 million people. It also has 2200 Islamic mosques. Five times a day the call to prayer sounds forth from the countless minarets. People assemble in the mosque courtyards to kneel, bow, and pray. But the young people of Istanbul are not among them. In talking with Dan and his team, their observation is that Turkish teens and young adults are not much interested in Islam. My brief 8-day observations are the same. Young Turks are interested in Western European and American things. Consumerism and style are the new religion. Look at the entrance to a mosque when prayer time is over and you’ll see mostly a bunch of old men exiting. In lieu of a dissipating Islamic spiritual presence in Istanbul there appears a dark spiritual vacuum, which will never be satisfied by Western materialism. Thus it is a time of great opportunity for the message of Christ to be available to the masses of youth who will eventually begin to seek out the deeper answers to life.
Posted by John Piippo at 11:31 AM