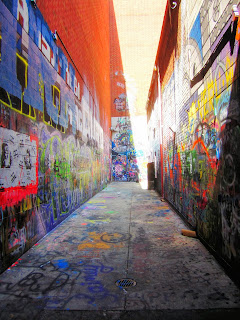 One of my recent books is Deconstructing Progressive Christianity. In it, I define the term "deconstruction." Perhaps this is the most misunderstood word in America today.

Here is what it does not, and does, mean, to vaccinate us from the fetid swamp of banality,

"Despite this seemingly unrestrained proliferation of the word across the vernacular, “deconstruction” remains a kind of slippery signifier and empty placeholder. We all kind of know or at least think we have a sense of what the word indicates. And yet, if you ask someone to explain it, what you typically get is a rather confused shell game of word substitutions, where “deconstruction” is loosely associated with other concepts like “disassembly,” “destruction,” “reverse engineering,” or “the act of taking something apart.”

Despite the circulation of these familiar (mis)understandings, the term “deconstruction” does not indicate something negative. What it signifies is neither simply synonymous with destruction nor the opposite of construction. As Jacques Derrida, the fabricator of the neologism and progenitor of the concept, pointed out in the afterword to the book Limited Inc: “The ‘de-’ of deconstruction signifies not the demolition of what is constructing itself, but rather what remains to be thought beyond the constructionist or destructionist schema.” For this reason, deconstruction is something entirely other than what is typically understood and delimited by the conceptual opposition situated between the two terms “construction” and “destruction.” In fact, to put it schematically, deconstruction comprises a kind of general strategy by which to intervene in this and all the other logical oppositions and conceptual dichotomies that have and continue to organize how we think and how we speak."

There you go. If you don't understand that, then you remain clueless as to the meaning of the term.