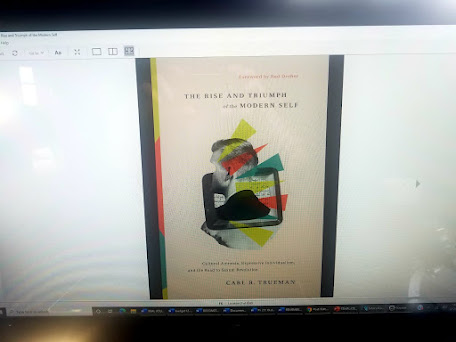 MY BOOK OF THE YEAR

The most important, most helpful book I read this year is The Rise and Triumph of the Modern Self: Cultural Amnesia, Expressive Individualism, and the Road to Sexual Revolution.

Wow! I just finished it. I took copious notes, and am going to slowly re-read it.

This book traces the transformation of human identity into a primarily psychological understanding of personal identity as a state of mind or a state of feelings.

three of the RUNNERS-UP...

Cynical Theories: How Activist Scholarship Made everything About Race, Gender, and Identity - and Why This Harms Everybody. By Helen Pluckrose and James Lindsey.

This is a savaging, intelligent assault on Critical Theory. It's written by two atheist scholars. What initially caught my attention were these two atheist reviews.

"Many people are nonplussed by the surge of wokery, social justice warfare, intersectionality, and identity politics that has spilled out of academia and inundated other spheres of life. Where did it come from? What ideas are behind it? This book exposes the surprisingly shallow intellectual roots of the movements that appear to be engulfing our culture."

"Is there a school of thought so empty, so vacuous, so pretentious, so wantonly obscurantist, so stupefyingly boring that even a full-frontal attack on it cannot be read without an exasperated yawn? Yes. It is called postmodernism. If you sincerely want to understand what postmodernism is, read this exceptionally well-informed book by two noble heroes of the enlightenment project. If you have better uses for your neurons and your time, stick to science. It’s the real deal."

The Decadent Society: How We Became Victims of Our Own Success. By Ross Douthat.

This book... explains what happens when a rich and powerful society ceases advancing—how the combination of wealth and technological proficiency with economic stagnation, political stalemates, cultural exhaustion, and demographic decline creates a strange kind of “sustainable decadence,” a civilizational languor that could endure for longer than we think.

So much for "progessivism," right?

When Narcissism Comes to Church: Healing Your Community from Emotional and Spiritual Abuse. By Chuck DeGroat.

The evangelical church in America has, for too long, nurtured and supported narcissism in our leaders.

For Christmas I received Charles Taylor's Sources of the Self: The Making of Modern Identity. I'm thirty pages into this book that is big, not just in terms of page length, but in wisdom, analysis, and understanding.