30 LETTERS TO MY CHURCH on DISCIPLESHIP - LETTER 23 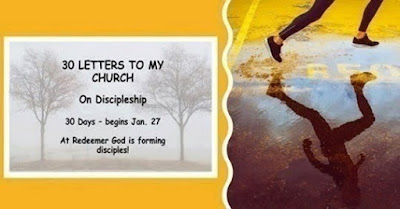 LETTER #23 - A DISCIPLE OF CHRIST CONFESSES THEIR SINS

I want you to experience the freedom of confessing and forgiving.

Prior to my conversion at age twenty-one I remember admitting I was wrong only once in my life. I was in the ninth grade. It happened in band class.

My teacher was Mr. Rudy Saarinen. Mr. Saarinen was a man I admired. Plus, he was Finnish, like myself. Plus plus, my mother's Finnish maiden name was Saari.

I felt connected to Mr. Saarinen. He was an excellent teacher, kind, and grace-filled.
I played clarinet. I was second-chair clarinet, sometimes third chair. But never first chair. A student names Bill was first chair. And deservedly so. He was a far better clarinet player than I was.
If a player wanted to occupy first chair, they could offer a challenge. It went like this. The two players went into the instrument room and closed the door, so students in the band room could not see them. Then, both players individually played a piece the challenger had picked out. The students would vote for who they thought did the best job.
On the day I challenged Bill I remember that, when it was his turn to play, I thought of something funny and started to giggle. I fought to suppress it, but failed. Bill tried to suppress laughing, but couldn't. The result was he laughed into the clarinet mouthpiece, and it squawked! The students heard the horrible noise. They voted that I won the challenge.
I took first chair. Bill  occupied second chair.

I knew this was not right, and felt weird sitting there. So, after class, I went to Mr. Saarinen and told him what had happened. He thanked me for telling him, and told me I would be moved back into second chair. The way Mr. Saarinen handled this left an impression on me. I felt relieved after confessing to him!

Eight years passed. I was twenty-one. I had become a disciple of Jesus. And, I was also falling in love with Linda.

One night we were in an argument over something. It was our first fight. She did not agree with me about something. How was that possible? I had been personally invited to join the university debate team!
As I was trying to convince Linda I was right, this thought came to me: "You are wrong. She is right. Admit it."
But I did not, and proceeded to keep arguing. I have the ability to argue a point even when I know I am wrong. I can even make the person who is right begin to question themselves, and feel they are the one who is wrong. I was doing that to Linda. But I could not escape the truth that I was in the wrong. What should I do?
Beyond my eighth grade band incident, I had little experience in confessing. I assumed if I admitted I was wrong, this would be seen as weakness.
Finally, I stopped the argument, and said these transforming words: "Linda, you are right, and I am wrong. Would you forgive me for arguing with you even when I knew I was wrong?"
I braced myself for the worst. Why would Linda want to date someone who admitted they were wrong? Why would she want to be with someone who knew they were wrong about something, but kept arguing anyway? Yuck!
Linda said, "I forgive you."
And I began laughing, at myself. God released me from something. Linda forgave me. How good this felt!

People who are free can admit failure and wrongness and confess and forgive one another. Confession and forgiveness become twin engines of renewal and bitterness-removal that constantly hum in the background, day after day, giving life to all who practice them.

In the School of Jesus I have learned that the foundation of all authentic relationship and spiritual renewal is confession and forgiveness.
Be accountable for your actions, before God, and before others.

Forgive those who trespass against you.

Confession and forgiveness have become habitual for me.

I am free to be accountable for my behaviors.

When someone hurts me, I am able to forgive them.

When I hurt someone, I always ask for their forgiveness.

Confession and forgiveness are twin engines lifting me to life and freedom.
Posted by John Piippo at 7:51 AM