Jesus' Birth Was an Act of War 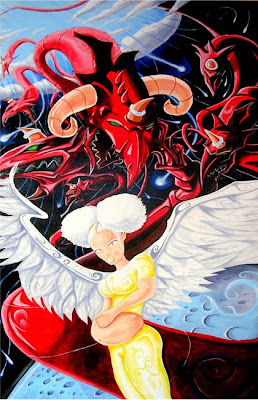 (I re-post this every December.)

C.S. Lewis referred to it as "The Great Invasion." In chapter 7 of Mere Christianity Lewis writes:

"One of the things that surprised me when I first read the New Testament seriously was that it talked so much about a Dark Power in the universe--a mighty evil spirit who was held to be the Power behind death and disease, and sin...  Christianity agrees... that this universe is at war. But it does not think this is a war between independent powers. It thinks it is a civil war, a rebellion, and that we are living in a part of the universe occupied by the rebel.

Enemy-occupied territory--that is what this world is. Christianity is the story of how the rightful king has landed, you might say landed in disguise, and is calling us all to take part in a great campaign of sabotage. When you go to church you are really listening-in to the secret wireless from our friends: that is why the enemy is so anxious to prevent us from going. He does it by playing on our conceit and laziness and intellectual snobbery. I know someone will ask me, 'Do you really mean, at this time of day, to re-introduce our old friend the devil-hoofs and horns and all?' Well, what the time of day has to do with it I do not know. And I am not particular about the hoofs and horns. But in other respects my answer is 'Yes, I do.' I do not claim to know anything about his personal appearance. If anybody really wants to know him better I would say to that person, 'Don't worry. If you really want to, you will. Whether you'll like it when you do is another question.'"

The most a-cultural telling of Christmas is found in Revelation 12:1-7. We read:

"A great and wondrous sign appeared in heaven: a woman clothed with the sun, with the moon under her feet and a crown of twelve stars on her head. She was pregnant and cried out in pain as she was about to give birth. Then another sign appeared in heaven: an enormous red dragon with seven heads and ten horns and seven crowns on his heads. His tail swept a third of the stars out of the sky and flung them to the earth. The dragon stood in front of the woman who was about to give birth, so that he might devour her child the moment it was born. She gave birth to a son, a male child, who will rule all the nations with an iron scepter. And her child was snatched up to God and to his throne. The woman fled into the desert to a place prepared for her by God, where she might be taken care of for 1,260 days.

And there was war in heaven."

Mary has already been prophetically warned about such things. In Luke 2 we read that...

...the old man "Simeon took him [baby Jesus] in his arms and praised God, saying: "Sovereign Lord, as you have promised, you now dismiss your servant in peace. For my eyes have seen your salvation, which you have prepared in the sight of all people, a light for revelation to the Gentiles and for glory to your people Israel." The child's father and mother marveled at what was said about him. Then Simeon blessed them and said to Mary, his mother: "This child is destined to cause the falling and rising of many in Israel, and to be a sign that will be spoken against, so that the thoughts of many hearts will be revealed. And a sword will pierce your own soul too."

Christmas Eve - that violent night when the Light of the World descended into darkness...

***My books are:
Praying: Reflections on 40 Years of Solitary Conversations with God
Leading the Presence-Driven Church
Encounters with the Holy Spirit (co-edited with Janice Trigg)
I am now writing:
How God Changes the Human Heart
Then, Linda and I will co-author our book on Relationships.
I continue gathering material for Technology and Spiritual Formation.
Posted by John Piippo at 9:17 AM