In Luke 1 Mary sings a song.

“My soul glorifies the Lord47     and my spirit rejoices in God my Savior,48 for he has been mindful    of the humble state of his servant.From now on all generations will call me blessed,49     for the Mighty One has done great things for me—    holy is his name.50 His mercy extends to those who fear him,    from generation to generation.51 He has performed mighty deeds with his arm;    he has scattered those who are proud in their inmost thoughts.52 He has brought down rulers from their thrones    but has lifted up the humble.53 He has filled the hungry with good things    but has sent the rich away empty.54 He has helped his servant Israel,    remembering to be merciful55 to Abraham and his descendants forever,    just as he promised our ancestors.”

I have highlighted in bold the verses that invert the ungodly honor/shame hierarchies of the world. These verses also subvert, they undermine, godless ideas of status and power.

“The social setting to which we are introduced in Luke 1:5-2:52 is one in which issues of social status  and social stratification are paramount. This is not to say that Luke is especially concerned with economic class – for example, as a function of one’s relative income or standard of living, or as related to one’s relationship to the means of production (as in Marxism). Such matters of post-industrial society have little meaning in Greco-Roman antiquity. Rather, Luke’s social world was defined around power and privilege, and is measured by a complex of phenomena – religious purity, family heritage, land ownership (for nonpriests), vocation, ethnicity, gender, education, and age.” (Green, The Gospel of Luke, pp. 59-60. Only $2.99 right now for Kindle - crazy!)

Green uses the following diagram to illustrate the prevailing honor/shame hierarchy during the time of Jesus. 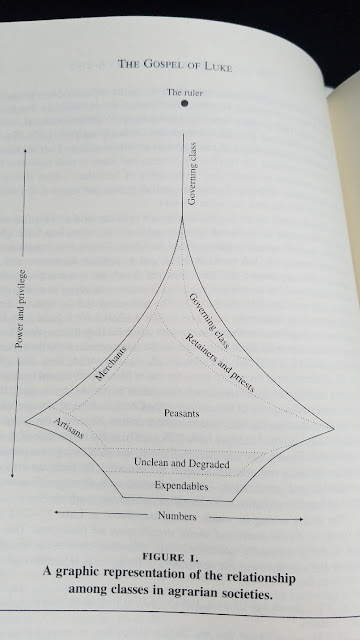 On the bottom of the pecking order are the "expendables." Like Mary, the mother of Jesus. Like Jesus himself. This is the revolutionary nature of the Incarnation. Christ gave up equality with God and became, on the "power and privilege" scale, a social "nothing" (no power; no privilege; no honor; all shame).

The Roman leaders and Jewish religious establishment understood this; viz., that this man Jesus of No-town (Nazareth) is a bottom-feeding None-person. I would love to have a video of the looks on their faces when Jesus goes about healing and delivering people, claiming to be the promised Messiah, and drawing crowds.

Jesus has not come to play status games on the honor/shame hierarchy, but to abolish it ("neither slave nor free, Jew nor Greek, male nor female").

Praying: Reflections on 40 Years of Solitary Conversations with God.

Leading the Presence-Driven Church
Posted by John Piippo at 9:57 PM