An Argument for Infanticide and an Argument Against Abortion

In my MCCC Logic classes we are currently discussing psychological barriers to rational thinking. It's OK to feel emotions when reasoning logically, but sometimes emotions can prevent a person from thinking clearly.

Last night I presented Beckwith's anti-abortion philosophical argument. The students' discussion of this argument of this was the most lively and stimulating I've seen in any of my classes. Thank you!

Here are the arguments, for my logic students.

Singer argues, in his essay “Taking Life: Humans” (1993), that it is morally acceptable to kill, in some cases, disabled infants. (Note: Singer has since refined his views.)

Before I show you the argument, here are some of Singer’s assumptions.

2.   Fetuses and newborn babies do not possess self-consciousness. They are “merely conscious.”
a. “The fact that a being is a human being, in the sense of a member of the species Homo sapiens, is not relevant to the wrongness of killing it; it is, rather, characteristics like rationality, autonomy, and self-consciousness that make a difference. Infants lack these characteristics. Killing them, therefore, cannot be equated with killing normal human beings, or any other self-conscious beings.”
4.   “Killing a self-conscious being is a more serious matter than killing a merely conscious being. Killing a disabled infant is not morally equivalent to killing a person. Very often it is not wrong at all.”

5.   Being a member of the human species is irrelevant to a baby’s moral status.

6.   A parent may want to “replace” (the “replaceability thesis”) their defective baby with another baby, hopefully to be born.

Singer’s argument in his own words reads: 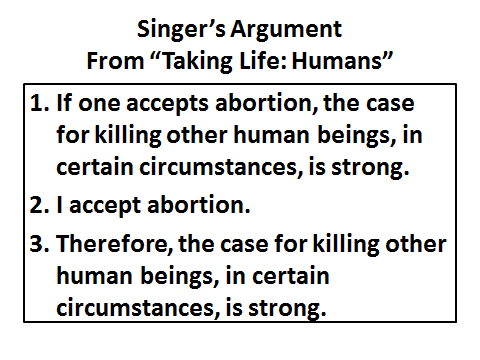