"On Friday, congregants at the Wenling Church in the city of Taizhou faced off with as many as 4,000 police officers but failed to prevent the removal of two crosses from atop their building. One congregant said as many as 40 people were detained during the standoff."

In China the growing number of Jesus-followers is equaling the number of atheistic Maoists. "Church leaders and analysts say the battle in Zhejiang, one of China’s wealthiest provinces, highlights the Chinese leadership’s discomfort with the growing allure of Christianity, whose adherents are said to rival in number the 86 million members of the Communist Party."

Here's a picture of the Wenling Church as their cross is removed. 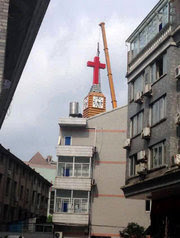 While this was happening hundreds of Christians sang hymns as the atheistic government riot police surrounded the church. Some of the riot police were wearing red armbands, just like the red guards during the Cultural revolution.

"Across Zhejiang, scores of congregations have organized round-the-clock lookout teams to watch for arriving demolition crews. At Salvation Church in Wenzhou, more than 100 parishioners have been standing sentinel since July 21, when a pitched battle between the police and congregants left more than 50 parishioners injured, some seriously. Although the director of the church, facing intense government pressure, said he would allow the cross to be removed, congregants have vowed to resist."


"A similar scene unfolded on Monday at the Longgang Township Gratitude Church. Mr. Qu, the pastor from the nearby church, said about 200 people, some in their 70s and 80s, who were holding a vigil in front of the church ultimately stepped aside to allow the police to move when they arrived with a bulldozer.
After more than two hours, the cross was lowered by crane and handed over to the parishioners, who carried it back into the church. “Many of them were weeping inconsolably,” Mr. Qu said."
Posted by John Piippo at 9:10 AM