The Birth of the American Jesus 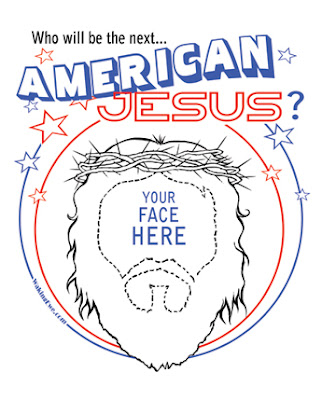 Every Jesus isn't the Real Jesus.

In spite of the number of Americans who refer to themselves as "Christians" there is, by observation and evidential literature, big-time Jesus-illiteracy everywhere. For example, when I poll my college philosophy students and ask them if they know the main message of Jesus, not one can say "the kingdom of God."

At Redeemer, we preach and teach about Jesus. Yes, I am familiar with historical Christological studies. One of my doctoral qualifying exams was on early Christology (the study of Christ). I've studied Christology for decades. I am aware of the possible arrogance of claiming to know the Real Jesus. People tend to make Jesus into their own self. This era's historical Jesus scholars understand this, and do what they need to do to avoid making Jesus into their own image.

Boston University religious scholar Stephen Prothero says the American Jesus was born "as Thomas Jefferson sat down in the White House, razor in hand, and began to cut and paste his own Bible." (Prothero, American Jesus: How the Son of God Became a National Icon, 13) The famous "Jefferson Bible," now located in the Smithsonian, can be read in its entirety here. Notice that the very last verses in Jefferson' preferred version is:


There they laid Jesus. And rolled a great stone to the door of the sepulcher, and departed.

That's it. End of story.

Jefferson cut out the resurrection of Jesus. Plus, he extricated all supernatural verses and miraculous stories. Prothero writes: "Soon Christians too were emphasizing Jesus' humanity over his divinity." The American Jesus was born... in the White House!