Prayer As a Total Way of Life 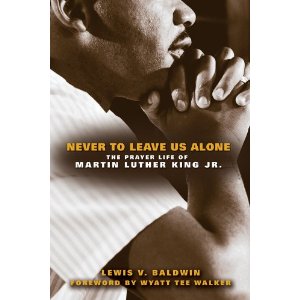 Lewis Baldwin's book on the prayer life of Martin Luther King, Jr., is so good, so helpful in putting King's life and accomplishments in perspective. King the Christian theist believed God responded to our prayers, and that to be a praying person was essential if anything godly was to happen in our struggling and systemically evil world.

Baldwin writes: "As far as King was concerned, he was involved in essentially a "spiritual movement" and not simply a struggle for equal rights, social justice, and peace; this invariably meant prayer and praying, much like the spiritual discipline of nonviolence, had to be for him a daily activity and a total way of life. Otherwise, the quest to redeem and transform the moral and political spirit of the nation and of humanity as a whole would ultimately prove futile and perhaps even counterproductive." (Baldwin, 68)