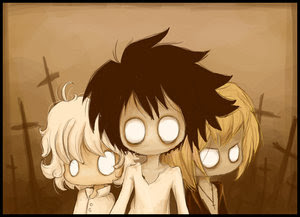 "Boredom" is not having nothing to do; "boredom" is finding no meaning in what you are doing.

A person works for hours at a job and the clock drips down the wall like a Salvador Dali painting. One student sits in class bored out of her skull while another student is fully engaged and time flies by.

I live in a land where there are more things to do than ever and yet many are bored out of their minds. Evidence for cultural boredom is seen in things like: the inability to be still; non-reflective capacity; the Facebook Nation and its many games; oxymoronish appeals that couple money, sex, and power; the mass marketing of diversions; the loss of true happiness (see Aristotle [eudaimonia], and J.P. Moreland); "church" as entertainment of the masses [Thou shalt not bore the people!]; and Kierkegaardian herds of wandering norm-less amoralists entertaining one another with their boredom-fueled evil.

Anomie: a personal condition resulting from a lack of norms.

Sociologist Emile Durkheim wrote: "The state of anomie is impossible whenever interdependent organs are sufficiently in contact and sufficiently extensive. If they are close to each other, they are readily aware, in every situation, of the need which they have of one-another, and consequently they have an active and permanent feeling of mutual dependence." "Durkheim defined the term anomie as a condition where social and/or moral norms are confused, unclear, or simply not present. Durkheim felt that this lack of norms--or preaccepted limits on behavior in a society--led to deviant behavior."

Some "churches" have lots of stuff going on yet are boring. Why? They've lost their sense of fitness in the context of the Grand Narrative. THE MOVEMENT is not boring.
Posted by John Piippo at 9:13 AM