Ingmar Bergman Slips Into the Darkness... 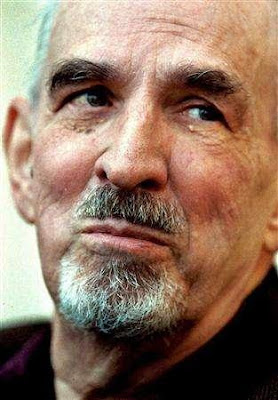 I will never forget the chess match with death in Ingmar Bergman's movie The Seventh Seal. I watched it many years ago, and then again just a year ago. It's bleak, nihilistic atmosphere proved a foil for my theistic worldview. I remember thinking, if there is no God, then life looks like a Bergman movie, and religious people are "heroic" quixotic individuals sparring with windmills. (Watch the chess match here.)
Ingmar Bergman died today at the age of 89.
One report today writes: "When the news broke that Ingmar Bergman had died on the lonely and windswept island of Faro, off the coast of Sweden, it seemed like an appropriately tragic spot. Bergman spent a lifetime creating lonely and windswept movies: a cinema of inner life in which man was tormented by his relationship with women and with God."
In his autobiography Bergman wrote, re. God: "I have struggled all my life with a tormented and joyless relationship with God. Faith and lack of faith, punishment, grace and rejection, all were real to me, all were imperative. My prayers stank of anguish, entreaty, trust, loathing and despair. God spoke, God said nothing. Do not turn from Thy face. The lost hours of that operation provided me with a calming message. You were born without purpose, you live without meaning, living is its own meaning. When you die, you are extinguished. From being you will be transformed to non-being. A god does not necessarily dwell among our capricious atoms. This insight has brought with it a certain security that has resolutely eliminated anguish and tumult, though on the other hand I have never denied my second (or first) life, that of the spirit."
Bergman was married five times and had many sexual liaisons with the leading actresses in his films. He is considered to be one of the greatest, if not even the greatest, film-maker of all time. When I read of his death today I experienced a sense of loss, like the loss of an old friend. I found, in his films, an authentic representation of his experience of the non-response of God to his searching and prayers. I don't personally affirm his conclusions, but I do find his work valuable, especially when I hear "atheists" joyfully declare God's non-existence.
Posted by John Piippo at 2:12 PM