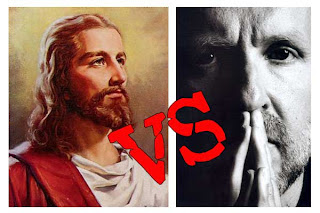 Alas, this whole affair is just the latest in the long-running media attack on the historical Jesus, which – we thought – had culminated in that book of lies, The Da Vinci Code. But no: the caricatures of Christ continue.
Please, lose no sleep over the Talpiot “discoveries” for the following reasons, and here are the facts:.
1) Nothing is new here: scholars have known about the ossuaries ever since March of 1980. The general public learned when the BBC filmed a documentary on them in 1996. James Tabor’s book, The Jesus Dynasty, also made a big fuss over the Talpiot tombs more recently, and now James Cameron (The Titanic) and Simcha Jacobovici have climbed aboard the sensationalist bandwagon as well. He
2) All the names – Yeshua, Joseph, Maria, Mariamene, Matia, Judah, and Jose -- are extremely frequent Jewish names for that time and place, and thus most schol-ars consider this merely coincidental, as they did from the start. One-quarter of Jewish women at that time, for example, were named Maria.
3) There is no reason whatever to equate “Mary Magdalene” with “Mariamene,”as Jacobovici claims.
4) So what if her DNA is different from that of “Yeshua” ? That particular :Mariamme” (as it is usually spelled today) could indeed have been the wife of that particular “Yeshua.”
5) What in the world is the “Jesus Family” doing, having a burial plot in Jerusalem, of all places, the very city that crucified Jesus? Galilee was their home. In Galilee they could have had such a family plot, not Judea. Besides all of which, church tradition – and Eusebius – are unanimous in reporting that Mary died in Ephesus, where the apostle John, faithful to his commission from Jesus on the cross, had accompanied Mary.
6) If this were Jesus’ family burial, what is Matthew doing there – if indeed “Ma-tia” is thus to be translated?
7) How come there is no tradition whatever – Christian, Jewish, or secular -- that any part of the Holy Family was buried at Jerusalem?
8) Please note the extreme bias of the director and narrator, Simcha Jacobovici. The man is an Indiana-Jones-wannabe, who oversensationalizes anything he touches. You may have caught him on his TV special regarding The Exodus, in which the man “explained” just everything that still needed proving or explaining in the Exodus account in the Old Testament! It finally became ludicrous, and now he’s doing it again. – As for James Cameron, how do you follow The Titanic? Well, with an even more “titanic” story. He should have known better.
There are more arguments, to be sure, but I want to get this off pronto.

Jewish archaeologist Amos Kloner oversaw the original did at Tilpial. Kloner is here quoted in The Jerusalem Post. Kloner says, "There is no likelihood that Jesus and his relatives had a family tomb... They were a Galilee family with no ties in Jerusalem. The Talpiot tomb belonged to a middle-class family from the 1st century CE."