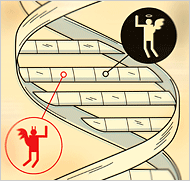 Today's nytimes.com has an article called "An Evolutionary Theory of Right and Wrong." Marc D. Hauser, a Harvard biologist, has built on this idea to propose that people are born with a moral grammar wired into their neural circuits by evolution. Hauser presents his argument as a hypothesis to be proved, not as an established fact. All persons, in all times and places, have an innate "moral grammar."

I find this thesis interesting. It will argue against moral relativism. And, I believe it has implications for the biblical idea found in Romans 2:15, which states that "the requirements of the law are written on [our] hearts."

Hauser's work "challenges the general belief that moral behavior is learned." Rather, it is given to us, or is in us, at birth. The moral "law" unfolds during our lifetime. In this sense it is discovered, rather than invented.
Posted by John Piippo at 8:35 AM