Only the Free Can Forgive From the Heart

While here at Payne Seminary I've talked with my students about a heart of forgiveness towards those who have hurt us. Personally, I am praying for this kind of heart, which is the amazing heart of Christ.

My father had a friend who worked at Rockford Dragway, our local quarter-mile dragstrip that brought in big-name cars and racers. Like the weekend Art Arfons and his "Green Monster" came to town. Dad's friend invited us to come watch the Green Monster race. What 14-year-old kid would turn down a chance to see that! When we got to the dragstrip the friend asked me if I'd like to be the first to ride on the quarter-mile track that evening. He had a Ford Shelby Cobra (top speed 165-185 mph), and took me for a ride unlike any I'd ever experienced before. After the race he opened up the hood and showed me the engine that powered this thing. Then we walked over to the Green Monster and looked at the engine that set a land speed record of 576 miles per hour!

When God opens up the hood to show us what powers the Kingdom of God, what we see is pure heart-love, manifested in grace, mercy, and forgiveness. The most stunning example of this is seen in Luke 23:34 - :"Father, forgive them, for they do not know what they are doing." Jesus says this about men who have just pounded nails through his hands.

To forgive means: "to cancel a debt." To forgive someone means they are no longer indebted to you. When Jesus asks the Father to forgive them, he's asking that they be released from their indebtedness. If the Father forgives them, they won't have to pay anymore.


I've had people hurt me. At times I deserved it; mostly I did not deserve it. Once, when I was a kid, I was teasing another kid. A lot. He surprised me by hitting me so hard in the stomach that I doubled over. I hated him after that. I never forgot what he did to me even though, upon reflection, I saw that I deserved it.

It's the same with you. You've hurt people; you've been hurt by people. That's life in the kingdom of darkness. But in the Kingdom of God it's different. When we pray "God, bring your Kingdom to this earth" the difference will not be that we no longer get hurt. The difference will be that we no longer will hate and hurt others. Hatred of people has no place in God's Kingdom.

Many years ago, in another church I was in, there was a man who made some serious financial misjudgments and cost our church a lot of money. A few years ago he called me. I felt tense talking with him after those many years. He said, "I called to tell you I was wrong and to ask for your forgiveness." I said, "I forgive you." Three beautiful words. When he heard them he began sobbing uncontrollably. A giant, heavy weight had been lifted off of his soul. To be released from indebtedness is the experience of freedom. Jesus asks the Father to release his persecutors from their indebtedness. If suddenly your indebtedness were canceled, how would you feel? Free!(If you want to see an example of this watch what happens to Robert DeNiro in the movie "The Mission.") 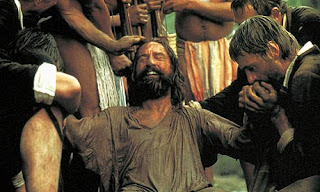 Jesus once told his disciples that they are to “Love your enemies and pray for those who abuse you, who persecute you.” (Luke 6:27-28). This was not some religious theory for Jesus. He's actually doing it, in Luke 23, as he hangs on a cross. This is His very heart.

In Acts 7 Jesus-follower Stephen, as he is being martyred, falls on his knees and cries out, "Lord, do not hold this sin against them." That's some kind of crazy, not-of-this-world love. Only the free can do this. A free person says, from the heart, "I can live without that indebtedness." Unforgiveness is a way of punishing, making a person "pay." Forgiveness lets go. This is the freedom of forgiveness.

How do you forgive the unforgivable? Like this. First, it is possible to forgive the unforgivable by remembering that the people who are hurting you do not really know what they are doing. But didn't the soldiers who flogged Jesus know what they were doing? Not really. They didn't know who that man on that cross was, what he was doing, and how much they needed the forgiveness he was achieving. When Jesus asked the Father to forgive them for they don't know what they do, he was saying "Father forgive them because they need forgiveness more than they know." The same is true of the people that have hurt you. They need your forgiveness more than they need anything else in the world. They probably will never change until you release them from their indebtedness. They may not even change if you do. But you still have to give it to them. Your forgiveness is a key to their freedom. Your unforgiveness perpetuates their imprisonment.

How do you forgive the unforgivable? It's possible to do this when you realize that Jesus forgave you when you were unforgivable. The situation, from God's POV, is not that you are the "good guy" and others are the "bad guys." Christ died for the bad guys, among which are: you. Personally, I have many moments, a lot of which come when I am celebrating the Lord's Table, when I think that God, not sparing, sent Christ to die and take away my sin. How much I have needed and still need the Father's forgiveness. I am a person of great indebtedness whose debt has been forgiven. How can I not forgive others for what they have done to me?


Jesus expected his disciples to forgive others just as he had forgiven them. As we look at this PLEASE NOTE: To forgive does NOT mean: to forget. If you stripped me naked and flogged me I’d never forget it. But I am to forgive you. And, to say “I forgive you” does NOT mean “I trust you.” Yet we are to cancel other people's indebtedness towards us. Again and again Jesus insisted that “If you do not forgive others their trespasses, neither will your father forgive your trespasses.” (Matthew 6:15) In fact, Jesus taught his followers to regularly pray like this: “Forgive us [cancel] our debts, as we also have forgiven our debtors [cancelled their indebtedness].” – Matt. 6:12


Jesus once stunned his disciples with his parable about the master who forgave the wickled servant. The servant rejoiced when set free from his great indebtedness. But he then turns and refuses to forgive the puny indebtedness of people who owe him. The master is enraged, and throws the servant into prison! Jesus comments on this: "This is how my heavenly Father will treat each of you unless you forgive your brother from your heart." (Matthew 18:35)


From your heart. With these words God lifts up the hood so we can see the engine that powers the Kingdom of Heaven. It is love that manifests itself in forgiveness, grace, and mercy. Without this engine, or with some "theoretical engine," the Kingdom won't run. True forgiveness is a heart-thing more than it is some mental assent to a truth. That's where real, genuine 100% forgiveness comes from. It's instructive to remember that Jesus didn't wear a 'WWJD' bracelet. As he was dying on the cross he didn't lean his head to the side, see a yellow bracelet that read 'WWID," ask himself "What Would I Do?" and deduce: "If I were Me I would forgive these people who are doing a very bad thing to me." A person who has a heart like Christ's won't need to ask the question WWJD? They would just do it, because the truth has descended from their head into their heart. The heart of Jesus was in the morphe (shape) of love and forgiveness. Therefore, Jesus forgave his enemies for what they did. When Jesus tells us we are to forgive others from our heart, he's not giving us another "rule."


Look closely now. Paul addresses the Galatian Jesus-followers this way: "My dear children, for whom I am again in the pains of childbirth until Christ is formed in you…" Dallas Willard, who has written so brilliantly on the idea of Christ-formation-in-us, says: "Spiritual formation in the tradition of Jesus Christ is the process of transformation of the inmost dimension of the human being, the heart, which is the same as the spirit or will. It is being formed (really, transformed) in such a way that its natural expression comes to be the deeds of Christ done in the power of Christ." The result is, as Paul write in Philippians 2:5: "Your attitude should be the same as that of Christ Jesus." And in 1 Corinthians 2:16 Paul states: "For who has known the mind of the Lord that he may instruct him?" But we have the mind of Christ."

Here's what this looks like to me. I had a friend named Robert who was a Green Beret. Robert won the all-military martial arts competition. His physical body was a trained war machine. Robert became a follower of Jesus. He was in my church. One day I said to Robert, let's do something fun in front of our whole church. Let's you and I pretend to fight, and you allow be to "defeat" you. I could use that as a sermon illustration. Robert looked at me seriously and said, "John, I can't do that." "Why?" "Because," Robert said, "I might kill you." Seriously? Yes, because Robert's physical body was trianed so that if someone touched him in a threatening way it would respond. He didn't have to wear a bracelet on his wrist to remind him of what a warrior would do. He was a warrior, and he would do it. In this sense his responses to danger were "from the heart." Robert had the heart and mind of a warrior. He had moved "beyond theory." Had he not, he would have died many times.

If you and I had the heart of Christ, or the "mind of Christ" (as Paul claimed to have), when we got confronted with people out to crucify us we'd heart-respond to them out of love and forgiveness. This is nothing less than the metamorphing of our being, as spoken of in Romans 12:1-2. Dallas Willard has called this the "renovation of the heart." As this happens one has "put on" the character of Christ.


Jesus calls us to forgive others from the heart. How is this possible? It is possible if we get a new heart. A renovated, transformed heart. The renovation of the heart into Jesus-love happens as we, daily, abide in Christ as a branch abides in the vine. "Striving" to love as Jesus loved will not do the job. Read, on this, John chapters 14-17. Abide. Dwell. Reside. Stay attached. Live "in Christ."

Welcome the Father as he comes to "make his home in you." The abiding habitation of the Father in our hearts is what transforms our impoverished, imprisoned, punishing, unforgiving hearts into hearts that freely forgive. It's true freedom to have a heart of forgiveness.

Only the free can forgive from the heart.
Posted by John Piippo at 11:19 AM