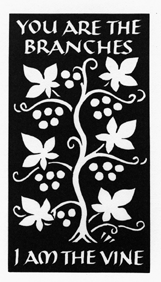 It must have been thirteen years ago (I can't remember) when NBC-Toledo sent a film crew up to Monroe to interview me re. my thoughts on Dan Brown's book The DaVinci Code. An entire half-hour was about this book, and I got to interact with news anchor Jim Blue. He asked me questions I did not know of in advance, but I was familiar with what he was asking and felt confident in my responses. Years later it's clear to see that, if a scholar wants to investigate Jesus, no one would look at the work of Dan Brown and the unscholarly thesis underlying DaVinci Code.

New Testament scholar Ben Witherington writes: “We live in a Jesus haunted culture that is Biblically illiterate, and so unfortunately at this point in time, almost anything can pass for knowledge of the historical Jesus…” from notions that he was a Cynic sage to ideas that he was a Gnostic guru to fantasies that he didn't exist, to Dan Brown's Jesus of hysterical (rather than historical) fiction.”


One thing we've done at Redeemer to upgrade our Jesus-literacy is preach chronologically through the four Gospels. This took us seven years! This immersion into the Jesus-texts has had a profound impact on me.

One impactful thing comes out of John  chapters 14-17. Here we have the last words of Jesus to his disciples. Therefore, they are very important. They wonder how they shall carry on without their Lord. Jesus does not respond by saying, "Form some committees and start some programs." Instead, he invites them into the Trinitarian perichoretic relationship of which he is a part.

In John 14:8-11. Philip asks Jesus, in a Moses-like request (Exodus 33:18), "Show us the Father and that will be enough." Jesus responds by saying "Philip, if you have seen me you have seen the Father." Then, Jesus says words that are, I think, the most profound revelation we have in the New Testament of the nature of Jesus in his relationship with the Father. He says: “I am in the Father and the Father is in me.” (John 14:11) Scholars have called this Son-Father relationship one of "mutual indwelling." It's intimate, close, and has been going on for eternity.

Early church leaders found a word that, to them, described the mutual indwelling of the Son and the Father and the Spirit: "perichoresis." From Theopedia: "Perichoresis is a Greek term used to describe the triune relationship between each person of the Godhead. It can be defined as co-indwelling, co-inhering, and mutual interpenetration. Alister McGrath writes that it "allows the individuality of the persons to be maintained, while insisting that each person shares in the life of the other two. An image often used to express this idea is that of a 'community of being,' in which each person, while maintaining its distinctive identity, penetrates the others and is penetrated by them.""


Perichoresis means, literally, "to move, or dance, around." God, in His 3-fold eternal personhood, is the explanation for the words Jesus speaks and the miracles, signs, and wonders Jesus does. The incredible news is that God invites us into this relationship. I am invited into the Big Dance.

Think of what Jesus says re. the Son-Father perichoretic relationship, and then look closely at what Jesus goes on to say:

· John 15:4 – “Abide in me, and I in you.”
· John 14:12 - I tell you the truth, anyone who has faith in me will do what I have been doing. He will do even greater things than these, because I am going to the Father. ·
· John 14:13 - And I will do whatever you ask in my name, so that the Son may bring glory to the Father. You may ask me for anything in my name, and I will do it.
· John 14:17-18 - But you know him, for he lives with you and will be in you. I will not leave you as orphans; I will come to you.
· John 14:23 - "If anyone loves me, he will obey my teaching. My Father will love him, and we will come to him and make our home with him.
· John 15:9 - As the Father has loved me, so have I loved you. Now remain in my love.
· John 15:15 - 15I no longer call you servants, because a servant does not know his master's business. Instead, I have called you friends, for everything that I learned from my Father I have made known to you.
· John 16:13-15 - When he, the Spirit of truth, comes, he will guide you into all truth. He will not speak on his own; he will speak only what he hears, and he will tell you what is yet to come. He will bring glory to me by taking from what is mine and making it known to you. All that belongs to the Father is mine. That is why I said the Spirit will take from what is mine and make it known to you.
· John 16:26 - the Father himself loves you because you have loved me and have believed that I came from God.
· John 17:5 – Jesus says… “And now, Father, glorify me in your presence with the glory I had with you before the world began.”
· John 17:20-23 - I pray also for those who will believe in me through their message, that all of them may be one, Father, just as you are in me and I am in you. May they also be in us so that the world may believe that you have sent me. I have given them the glory that you gave me, that they may be one as we are one: I in them and you in me. May they be brought to complete unity to let the world know that you sent me and have loved them even as you have loved me."

What makes sense of all these Jesus-words is what Jesus says in John 14:11. It's the secret of Jesus - what he says, what he does, how he lives. This is "Emmanuel, God with us."

The relationship Jesus the Son has with the Father is the pattern which Jesus wants to have with you. Just as Jesus lives by means of the Father at work in Him, so you and I can live by means of Jesus at work in us. God wants to move into your heart and live with you.
Posted by John Piippo at 9:59 PM