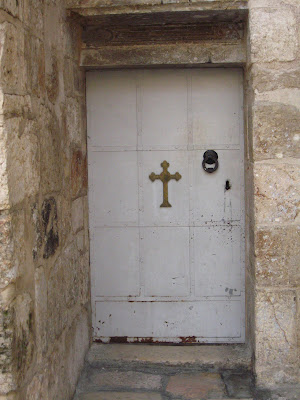 (Door, in Jerusalem)
Thirty-seven years ago I became a "man of sorrows, acquainted with grief." A son was born, and survived, for which I will always be grateful. His twin brother, whom Linda and I named David, died.
David was fully formed, yet stillborn. I held the weight of his dead body in my arms. I never will forget that moment, nor do I want to. I have rarely, if ever, felt such inner pain. "Grief" is the word we use to describe the indescribable. I was "grieving."
I read from four devotional books every morning. One of them contains selections from the writings of C.S. Lewis (A Year With C.S. Lewis). Fifty-two years ago, when I became a Jesus-follower, Lewis was there to greet me.
I went to a bookstore looking for Christian books, and purchased Dietrich Bonhoeffer's Ethics, and C.S. Lewis's Mere Christianity. I, the new Jesus-follower and philosophy major, had some powerful weapons in my hands. As I read Bonhoeffer I did not understand him. Later in life, I was finally ready to read The Cost of Discipleship, parts of which have never left me. Bonhoeffer's book renders most "discipleship" books written after him unnecessary.
It was Lewis that initially captivated me. Here was a brilliant scholar, a very good thinker, a convert from atheism to Christian theism, who also wrote for children. Lewis combined a sharp intellect with childlike wonder. He was introspective, perhaps too much so. Lewis lets us into his inner life, and I was drawn in to the working out of his salvation.
I read Mere Christianity, then the space trilogy (especially Perelandra), then the brilliant Till We Have Faces (I re-read it this summer), the Narnia books, and his books on miracles and pain and joy and so on.
Then I read A Grief Observed. It's about what's happening to Lewis's insides after his wife Joy died of cancer. Initially he published the book under a pseudonym, N.W. Clerk. (Sometimes I kick myself for not buying the N.W. Clerk edition for $20 I saw in a used bookstore in the early 1970s.) Lewis exposes all of himself in this grief journal; his pain, doubts, anguish, his awkwardness, loneliness, his fears, in an unforgettable architectonic of grief.
When I first read it, I thought Lewis, at times, was abandoning his Jesus-faith. Then I realized he's still fully a Jesus-follower who sounds like a 20th-century lament-psalmist, and who, in this journal, bears his entire heart and soul before the God he follows and the God he wonders about.
A Grief Observed was hard to read. I could not help but think of Linda, my young and beautiful wife, and what it would do to me should she die before I do. Or, conversely, the thought of her being alone, without me, was hard to entertain.
Lewis writes:
"Meanwhile, where is God? This is one of the most disquieting symptoms. When you are happy, so happy that you have no sense of needing Him, so happy that you are tempted to feel his claims upon you as an interruption, if you remember yourself and turn to Him in gratitude and praise, you will be - or so it feels - welcomed with open arms. But go to Him when your need is desperate, when all other help is vain, and what do you find? A door slammed in your face, and a sound of bolting and double bolting on the inside. After that, silence... There are no lights in the windows. It might be an empty house. Was it ever inhabited... Why is He so present a commander in our time of prosperity and so very absent a help in time of trouble?... Not that I am (I think) in much danger of ceasing to believe in God. The real danger is of coming to believe such dreadful things about Him."
If you've never before heard such words come out of a God-believer, you've never read the Psalms. You've not internalized the cry of Jesus from the cross, "My God, why have you forsaken me." You've never understood Paul, who writes in Romans 8:18, "I consider these present sufferings not worthy of being compared to the glory that will be revealed in heaven."
After reading Lewis on grief, I admired him more than ever. Following Jesus is not about being "happy" all the time. It is about advancing his Kingdom against the kingdom of evil and darkness and sin. As I write these words, in this moment, be assured there is a lot of grief out there. And rest assured that, in Jesus, the promised Messiah of Isaiah 53, we have "a man of sorrows who is acquainted with grief."
If you are grieving today, and are a lover of Jesus, do not be ashamed of your emotional anguish. In Jesus, you have a Redeemer who is well-acquainted with depths of anguish and the turbulent seas of your soul. While following Jesus has brought me the greatest joys in life, I have found him sympathetic to my every weakness, and that I can bring every part of me to him.
(Lewis published A Grief Observed in 1961. After that he wrote things like Letters to Malcolm: Chiefly on Prayer, and published Christian Reflections.)
Posted by John Piippo at 11:04 AM