Brian Boyd Tries to Squeeze Meaning Out of Meaninglessness 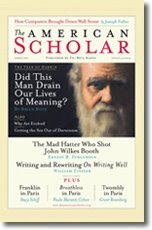 Brian Boyd, in "Purpose-Driven Life," claims that evolution does not rob life of meaning, but creates meaning. He writes: "In a very real sense, evolution creates purpose." What does he mean by this? I'm now going to ramble on a bit about this. I think he tries very hard to get "meaning" out of an essentially meaningless context and "purpose" without a Purposer. As an evolutionary naturalist he doesn't need to do this. Because: a "mindless process" cannot coherently be said to "create" anything.
He states: "We think of purpose as something prior to decision and action: I want to raise my arm, and, unless I am paralyzed or restrained, I do. But in fact purpose emerges slowly, in the species and in the individual." What? Boyd equivocates on the word "purpose." With Boyd we have Purpose 1 and Purpose 2, kind of like Dr. Seuss's Thing One and Thing 2 except they are far from identical. Purpose 1 needs a "Purposer." Purpose 2 does not. P1 is prescriptive (a "design" in mind); P2 is descriptive (how it works).
Boyd tries to explain P2, which I'm calling "emergent 'purpose'." He writes:
"My capacity to move my arm in as many ways as I can depends on things like the evolution of forelegs into arms early in the primate line, the evolution millions of years later of a rotating socket in the shoulder of great apes, to enable swinging in trees, and the further freeing up of arm movements after early hominids became fully bipedal. Babies flail their arms uncontrolledly and purposelessly for months before they can direct them in a particular way for a particular purpose."
Fine. But that's not the P1 I am looking for. I think it's weird, and misleading, to use "purpose" in this way. What Boyd does is merely descriptive; real purpose is prescriptive. Boyd's explanation amounts to no more than saying something like this: the sidewalk's being wet depends on the rain that fell a few minutes ago.
Boyd writes: "Purposes can emerge only piecemeal; problems cannot even define themselves until many of the elements are already in place." Why use "purpose" here? Why not something like "adaptation." Boyd states that "purposes define themselves." "Purposes evolve, and Darwinian processes extend them." "Intelligence and creativity are purposes that have emerged over the course of life on earth." No, purposes do not define themelves. If that's what Boyd means by "purpose" then he equivocates on P1 and gives us a false hope.
I see Boyd as trying to hard to get purpose and meaning out of the purposeless context of evolutionary naturalism. His essay mostly gives us ideas of what evolution is and how it works and explains thing. But to explain something is not to speak of its purpose or meaning. I can explain how a fried egg was made, but to do so is not equivalent to stating its meaning. Desribing the benefits of human intelligence is not the same as stating the meaning or purpose of intelligence, just as stating the benefits of eating a fried egg is not to give its meaning or purpose.
Let me define "meaning" this way: fitness in a coherent context. No coherent context = no meaning. Like what? Like the leaf I'm now looking at in my back yard. What's its meaning? The answer is: it has no meaning. But perhaps the leaf will decompose and nourish the soil? Maybe. Upon discovering this should we then say the leaf has a meaning and a purpose? No, because function is not the same as meaning and not the same as purpose. It's odd to say that, e.g., a rock's meaning is as a shelter for an earthworm. But if I see a series of rocks that have been placed so as to raise earthworms, that's a coherent context in which these rocks have meaning and purpose.
So, on evolutionary naturalism, nothing has meaning and purpose. If these concepts are used as equivalent to a description of how things came to be and function, then I find it unnecessary and confusing to to try to squeeze meaning and purpose out of an essentially non-purposive context.
NOTE: If there's a God who created the mechanism of natural selection as a means of creating things, then Boyd's response is unnecessary, and we're back to the Francis Collins/Ken Miller ideas re. theistic evolution.

ALSO: Watch for more writing like Boyd's. I read his essay as expressive of his own need to find meaning and purpose in the ultimately meaningless and purposeless context of evolutionary naturalism. Again, there is "no real sense" in which we can say that evolution "creates" anything.