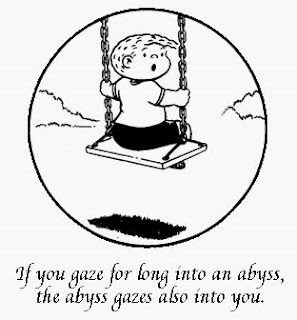 If you were an atheist, what should you worship? What should you give your life to? Bertrand Russell's answer was: worship "Goodness." Russell capitalizes 'Goodness,' and in a later writing admitted that "Free Man's Worship" may have been a bit too idealistic. Nevertheless, I do think Russell captures the logic of atheism.

By the "logic of atheism" I mean: what life is like if atheism is true. In one of the most famous atheistic paragraphs ever written Russell says:

"Such, in outline, but even more purposeless, more void of meaning, is the world which Science presents for our belief. Amid such a world, if anywhere, our ideals henceforward must find a home. That man is the product of causes which had no prevision of the end they were achieving; that his origin, his growth, his hopes and fears, his loves and his beliefs, are but the outcome of accidental collocations of atoms; that no fire, no heroism, no intensity of thought and feeling, can preserve an individual life beyond the grave; that all the labours of the ages, all the devotion, all the inspiration, all the noonday brightness of human genius, are destined to extinction in the vast death of the solar system, and that the whole temple of Man's achievement must inevitably be buried beneath the debris of a universe in ruins -- all these things, if not quite beyond dispute, are yet so nearly certain, that no philosophy which rejects them can hope to stand. Only within the scaffolding of these truths, only on the firm foundation of unyielding despair, can the soul's habitation henceforth be safely built."

Here are the Russell bullet-points.

Anticipating Richard Dawkins's The Blind Watchmaker, Russell writes next: "A strange mystery it is that Nature, omnipotent but blind, in the revolutions of her secular hurryings through the abysses of space, has brought forth at last a child, subject still to her power, but gifted with sight, with knowledge of good and evil, with the capacity of judging all the works of his unthinking Mother. In spite of death, the mark and seal of the parental control, Man is yet free, during his brief years, to examine, to criticise, to know, and in imagination to create. To him alone, in the world with which he is acquainted, this freedom belongs; and in this lies his superiority to the resistless forces that control his outward life."

So, while Nature is the big, bad, blind, pointless consuming Beast, it has mysteriously produced us, and we in our minds are free. How weird! For Russell this makes us "superior" to the "resistless forces" of Nature. In our minds we are free. We can make choices. And we can choose to worship, not Nature, but Goodness.

The big choice for us is this: "Shall we worship Force, or shall we worship Goodness? Shall our God exist and be evil, or shall he be recognized as the creation of our own conscience? The answer to this question is very momentous, and affects profoundly our whole morality. The worship of Force, to which Carlyle and Nietzsche and the creed of Militarism have accustomed us, is the result of failure to maintain our own ideals against a hostile universe: it is itself a prostrate submission to evil, a sacrifice of our best to Moloch." Russell thus rejects the Nietzschean choice of the worship of Power.

Were I an atheist, I would follow both Nietzsche and Russell this far, being forced to acknowledge points 1-3 above, with the Nietzschean addition of the loss of a moral foundation (the moral ontology of atheism does not provide a foundation for objective moral values). For this reason I would be forced to choose the "worship" of Power, not Goodness. I'd also seriously entertain the idea that, on atheism, we don't have free will (by "free will" meaning: choices not fully reducible to antecedent causal conditions). Then I'd really struggle with that last sentence, since it implies that there is an 'I' to "choose" to "entertain" any ideas. I'd have to look into the abyss of nihilism, admitting that there's little hope of overcoming it.
John Piippo at 10:11 PM
Share
‹
›
Home
View web version